The shark-like ray, with a unique saw-like snout (rostrum) that can extend up to 1.8 metres, is the focus of a collaborative study by USC PhD student Nikki Biskis and Sharks And Rays Australia (SARA), which began a campaign to collect sightings from the public in early 2019.

With sawfishes having lost over half of their habitat worldwide, and largely disappearing from the entire east coast of Australia, the study will build on ongoing research by SARA to fill in the gaps in information about the ray’s ecology, biology and distribution.

“Without our help they will very likely vanish quietly,” said Ms Biskis who had been collecting data on the rays while working with SARA for the past two years before starting her PhD at USC Fraser Coast this year under the supervision of USC marine biologist Dr Kathy Townsend.

“A lack of good historical data means no-one is really sure when the sawfish began to decline or to what extent,” she said.

“We want to involve everyone in data collection on these magnificent species,” she said. “If you have seen or accidentally caught a sawfish, no matter how long ago, or have photos of ‘saws’, we would like to know.”

The ongoing sighting submission campaign by Sharks And Rays Australia has already uncovered a historic breeding ground for freshwater sawfish in the Brisbane River.

SARA principal scientist Dr Barbara Wueringer said photos dating back to the 1950s and 60s at Tweed Heads and Baffle Creek in the Bundaberg region were among the last photographed sightings of sawfish in south-east Queensland.

“While we’ve had many leads about recent sightings at locations such as the Sunshine Coast and Moreton Bay, no submissions can be confirmed without photographs and specific GPS data,” Dr Wueringer said.

“Any photograph of sawfish capture south of Cairns is extremely useful to this study and sawfish conservation in general.” Sightings and images can be submitted to www.cytags.com

“This is an exciting collaboration between USC and SARA to be able to increase our knowledge of these critically endangered species.”

Australia is considered a ‘life-boat’ for four of the world’s five species of sawfish, which were once widely distributed in Northern Australia, including Australia's east coastline down to Sydney Harbour.

All four species of sawfish – freshwater (largetooth), green, narrow and dwarf – have been protected in Australian waters since 2009, and a national recovery plan for these unique rays was released in 2015.

Ms Biskis said the recovery plan had not been reviewed since it was put in place, while limited published research in Queensland was more than a decade old and restricted to the Gulf of Carpentaria, where most populations reside in remote, murky waters.

“This study can tell us where sawfish are still found in healthy numbers and assess how much populations are shrinking, which is critical data to identify the areas that are most important to species recovery, such as nurseries and migration zones.”

Ms Biskis was awarded a Destination Australia Scholarship to complete her PhD at USC’s Fraser Coast campus. The research project is also partly funded through a Queensland Citizen Science Grant to SARA by the Office of the Queensland Chief Scientist, and a Save Our Seas Foundation Small Grant. 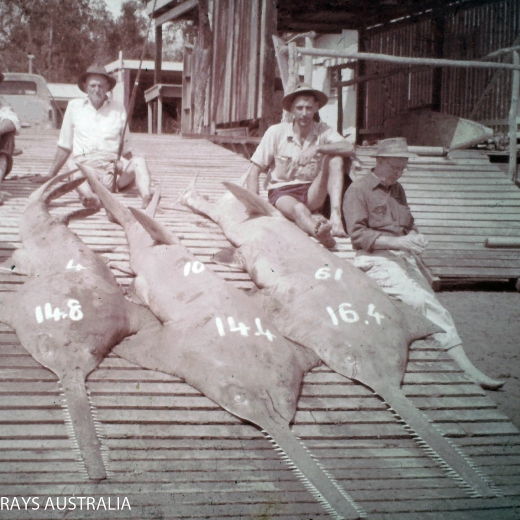