A USC study has found that female frogs tend to choose ‘unattractive’ males when there is a lot of traffic noise.

As a result, they may be missing out on good mating opportunities because they cannot hear the calls properly or are distracted by the noise, according to a research paper released today in the scientific journal Acta Ethologica.

The research from USC’s Global Change Ecology Research Group said that it could spell disaster for overall reproductive success and population survival in urban frogs if this kind of distraction and behaviour was widespread.

Dr Potvin said the frog species was commonly found in suburban ponds from northern Queensland to southern New South Wales but rarely in heavily urbanised habitats, making it ideal for investigating potential behavioural traits that may be impacted by noise.

“A female frog’s quality of offspring depends on her ability to locate and ultimately select a suitable mate by responding to his mating call,” she said.

“While it is not the same for all frogs, for the Eastern Sedge species the male that puts more effort into his calls usually has more chance of winning the girl because the higher pitched and faster his calls, the more attractive he is to females of his species.

“This is probably related to the fact that producing more calls per minute requires more energy, so you need to be in good condition overall – with good food reserves and likely good genes – to produce these calls.”

In the controlled behavioural experiment, the frogs were presented with simultaneously broadcasted attractive and unattractive calls from opposing directions, once with background traffic noise and once without.

Traffic noise impacted on their selections, with females heading towards unattractive calls more often in search of a mate when traffic noise was being broadcast.

“The traffic noise seemed to have significantly less effect on male frogs, who will usually follow the calls of other males to fight or sneakily mate with females who might be around,” Dr Potvin said.

“The reasons for the poor choices were unclear, however it could be that increased stress caused by the noise was affecting their ability to make good mating decisions,” Dr Potvin said.

While some species are known to adjust acoustic signals to communicate more effectively in noisy habitats, this study allowed the researchers to investigate how the receivers of these signals might be impacted by human-generated noise.

“We recommend further experimentation based on our initial findings to gain further understanding of the effects of noise on receivers, especially for species that are highly acoustic, Dr Potvin said.

“Expanding our understanding should become a priority as frog species, in particular, are under immense pressure from disease, global change patterns and habitat loss.

“Increasing our knowledge about how human-altered soundscapes might be escalating this pressure is crucial for management and conservation.” 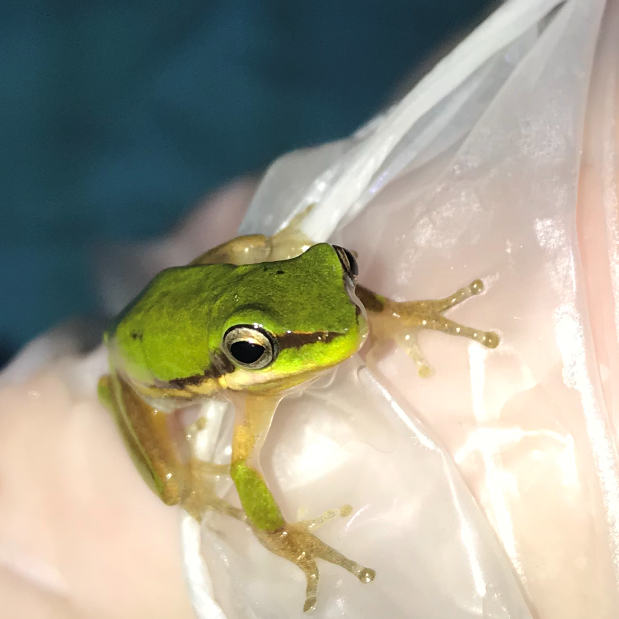 A field trip by two USC PhD students turned into a rescue mission for a sick green sea turtle today in waters off Hervey Bay.