After guiding USC to extraordinary success over 15 years, former Vice-Chancellor Professor Greg Hill AO has a permanent link to the University he embraced as part of the family.

He celebrated becoming an Emeritus Professor at a graduation ceremony in the USC Stadium at 12.30pm on Friday 9 April.

“To me, it’s a passport to stay connected to the University that I worked at for so long,” said Professor Hill, who retired last year.

Laraine Hill, Professor Hill’s wife, was recognised for her contribution to USC’s success at the same ceremony. She had been awarded an Honorary Senior Fellowship for her tireless work in advocacy and relationship-building for the University.

The former school teachers, and parents to four daughters, raised the aspirations and achievements of young people for decades in Queensland and the Northern Territory, arriving on the Sunshine Coast for Greg’s initial USC job as Deputy Vice-Chancellor in 2005.

“We’ve both been to so many graduations and USC community events, it's wonderful to see students and staff celebrating on campus again in 2021,” Professor Hill said. Their awards were conferred last year, when ceremonies were unable to be held on campus.

“Maintaining the culture of the University was always very important, with our inclusiveness, camaraderie and lack of barriers carrying over into relationships with the wider community.”

He said Professor Hill was recognised nationally for his research, teaching innovation, technology transfer to developing countries, and Indigenous education, and had implemented his vision to expand educational opportunities for people from all backgrounds.

USC’s geographic footprint was extended from the Fraser Coast to Moreton Bay, where a new campus that opened in 2020 was already surpassing expectations with 2,700 student enrolments this year.

The Friday ceremony also celebrated Noela Burton, who served USC for more than 22 years before becoming a Distinguished Companion of the University.

This award recognised her professional support to the Office of the Vice-Chancellor, advocacy of USC, and the many ways she fostered important relationships with external community members. 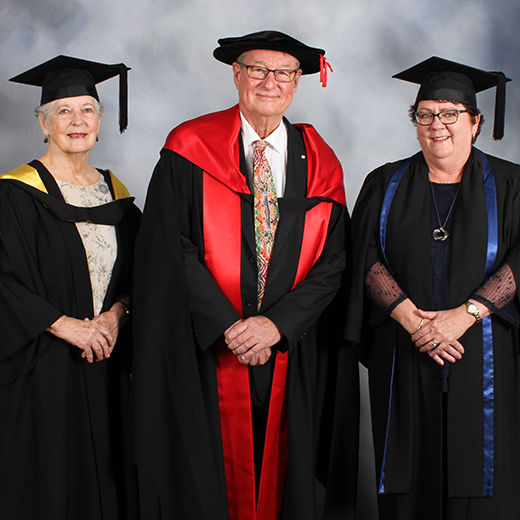 An Arana Hills swimming teacher and former national-level figure skater is turning her love of outdoor adventure into a career with a Bachelor of Recreation and Outdoor Environmental Studies from USC.