A retired Noosaville banker-turned-philanthropist is donating a six-figure endowment to extend her annual USC scholarship that encourages regional and rural women to study science, technology, engineering and mathematics (STEM) degrees.

Laurie Cowled is also donating the proceeds of a new biography on her extraordinary life to the USC Laurie Cowled Regional Scholarship, which provides a high-achieving regional student in financial need with $5,000 each year for a three or four-year degree.

“I turned 91 the other day and this makes me feel astonishingly young and vibrant,” said Ms Cowled, who grew up on a farm outside Bethungra in New South Wales and first moved to the Sunshine Coast with her husband in 1984.

“I get such a kick out of meeting and supporting these wonderful young women. They’re so enthusiastic and skilled in areas once thought to be male provinces. They make me feel that Australia has a great future.”

Ms Cowled said she enjoyed staying in contact with students as they pursued their goals. One was Sally Watson, who graduated with her USC Bachelor of Paramedic Science in 2018 and went straight into a coveted job with the Queensland Ambulance Service (QAS).

“We like to keep in contact, send each other emails and postcards,” said Ms Watson, who grew up at Charters Towers and enrolled at USC Sunshine Coast after a post-high school gap year.

“It was daunting at first, moving from a smaller area and leaving behind family,” she said. “But when I received the scholarship, I could focus on studying without stressing financially.

“It was easier to purchase things like textbooks and a stethoscope, as well as cover some costs when I completed three on-road practicums in Townsville, Caboolture and Vanuatu.”

“It’s so rewarding because the job is different every day,” she said. “We get to meet some amazing people and help them when they’re having their worst days. It’s special.

“We weren’t as busy as expected during the COVID-19 lockdown – most people seemed to be doing the right thing. I’ve met a lot of isolated, elderly people and I love talking to them.

“We take full precautions for any patients with respiratory issues. We wear gowns, masks and gloves and take them to a special area of the hospital.”

Ms Cowled, whose career was in banking, said she started making significant donations to institutions such as universities, the Australian Ballet School and NIDA in 2005 after her husband died.

“We’d always said the last one would leave money to charity and I was the last one. My passion was education and I wanted to do things for country girls,” she said.

Since 2011, she has funded course prizes and student support bursaries at USC as well as her annual scholarship.

“I now want to set up this endowment fund so the scholarship can hopefully go on forever,” she said. “I hope other people see the terrific pleasure you can get out of giving even a small amount, particularly if you’re interested in educating the next generation.”

Her biography, ‘A Joyous Addiction’, written by Michael Taylor, is self-published.

To contribute, go to the Laurie Cowled Regional Scholarship Fund. The scholarship will next be offered to USC students in Semester 1, 2021. 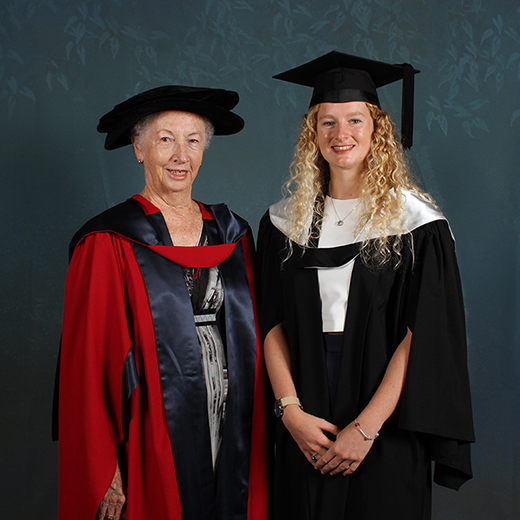