“I’m very interested in gene silencing, which is an extremely valuable molecular tool that scientists have used for the past two decades to determine what a certain gene does and how it can be manipulated to our advantage,” he said.

“This technique has been proven to work in practically every animal species, from the simplest jellyfish to the most complex such as humans and other mammals – but for some reason not in lobsters.”

Working under the supervision of USC Senior Lecturer in Science Dr Tomer Ventura, Thomas will attempt to induce gene silencing in lobsters to better understand the mechanism as a whole.

“This will enable the production of molecular tools for organisms that are not easily manipulated genetically, as well as assisting the crustacean biotech industry,” he said.

Thomas is working as a tutor at USC as he completes his Honours, which is the next step in his plan to gain a PhD and pursue a career in molecular genetics research.

“I distinctly remember when I had my first high school genetics class I knew, without a doubt, this is where I wanted to end up in life,” said Thomas, who completed senior at Caloundra State High School in 2016, achieving an OP2.

Eager to study locally and impressed by USC’s high ratings in teaching and student satisfaction, he enrolled in the Science Deans Scholars program for high-achieving school leavers.

Thomas continued his impressive academic results while completing his Science degree, earning a University Medal when he graduated with an outstanding grade point average of 6.85 out of 7.

“I think it helped a lot to have a strong goal in mind. I knew I wanted to be a researcher, and that kept me focused and engaged,” he said.

Thomas said he enjoyed the face-to-face teaching offered by USC and was motivated by a friendly rivalry with two high-achieving good friends.

He said the greatest influence on his studies was conducting volunteer research for USC’s USC’s Genecology Research Centre over the summer university break and during his final year.

“I learnt new and great science, and it really fuelled my passion. This motivated me to do well in my degree so I could get a running start into postgraduate research,” he said.

“My final year was the highlight of my undergraduate studies. The subjects were challenging and engaging, and I was also doing research. It was the point that I came into my own as a scientist.”

Thomas was a recipient of USC’s Renouf Family Scholarship, worth $20,000, when he began his studies, and this year was awarded a $5,000 Vice-Chancellor’s Honours Scholarship for students commencing Honours study. 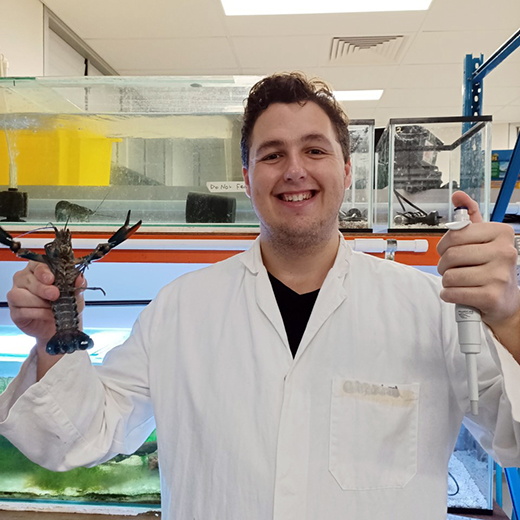 Studying a human anatomy subject at university while in Year 11 is part of Chancellor State College student Petra Nunn’s plan to eventually become a doctor.

USC’s 2019 Chancellor’s Medallist Michael Jefferies has been named Australian Law Student of the Year – for the second year in a row.