Research by a USC PhD graduate that used the latest drone-based remote sensing techniques to investigate sediment sources to the Great Barrier Reef is the catalyst for a joint project by the University and Australia’s national science agency, the CSIRO.

The new project builds on Dr Jack Koci’s PhD findings on gully erosion in grazing lands draining into the Great Barrier Reef, with the goal of improving both the quality of water entering the reef and agricultural productivity.

“Excess sediment and nutrients in runoff from farming and other industries is one of the major challenges facing the reef so there is great interest in finding ways to reduce the amounts of these in rivers and marine ecosystems,” Dr Koci said.

The 28-year-old Beerwah resident, who is employed on the project by USC’s Sustainability Research Centre, said gully erosion was a major source of sediment to the reef and also reduced the productivity of grazing enterprises in adjacent catchments.

“We want the sediments and nutrients to stay on the farms for agricultural production”.

He said the project would provide valuable new knowledge and understanding of gully erosion control measures and would offer environmental and economic benefits for other grazing and coastal regions.

Dr Koci said his interest in trade-offs between agriculture and the environment stemmed from growing up on his family avocado farm on the Atherton Tablelands.

“I moved into degrees that would allow me to follow my childhood interests in sustainable agriculture and I am proud and passionate about the useful and important PhD research I was able to complete at USC,” he said.

Dr Koci was recently awarded the University’s highest honour for a graduating student – the Chancellor’s Medal – for achieving his impressive PhD outcomes while also actively supporting other early and mid-career researchers at USC.

Together with USC Research Fellow Dr Madaline Healey, Dr Koci established a branch of the Researchers in Agriculture for International Development (RAID) network at the University.

“My main aim was to engage more young people in sustainable agriculture by raising awareness of the different career pathways into agricultural research and showing that it is an exciting space to be in,” he said.

Through blog articles on RAID’s national website, Dr Koci profiled the work of several USC researchers and promoted their activities through other social media platforms.

He connected researchers and industry professionals by organising several USC networking events, including a major event in association with the world’s leading tropical agriculture conference (TropAg) in 2017.

He also facilitated new partnerships between USC researchers and external organisations, such as the Australian Centre for International Agricultural Research (ACIAR), CSIRO and the Crawford Fund, a national support organisation for international agricultural research.

As part of these collaborations, a scholarship was established to support six USC early-career researchers to participate in the Crawford Fund’s Young Scholars’ program.

Dr Koci said one of the highlights of his time at USC was interacting with other Higher Degree by Research students.

“I consider myself very lucky, particularly being part of USC’s Sustainability Research Centre where there was a strong research culture and sense of collegiality, and more broadly being part of the wider USC community,” he said.

“Receiving the Chancellor’s Medal was unexpected as I didn’t see that I was doing anything out of the ordinary. However, it is an honour to be recognised.” 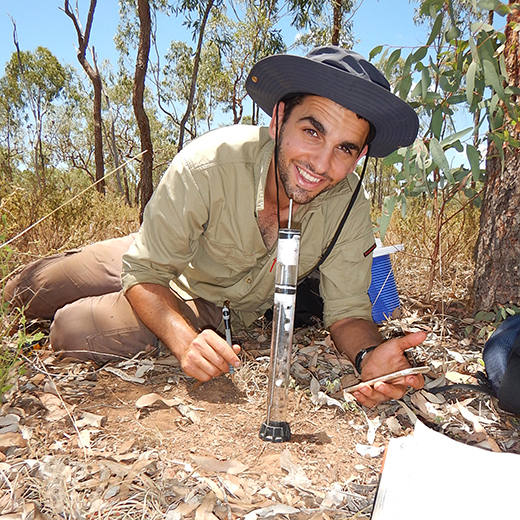