When intrepid tourists visit the remote Mata Mata Camp on South Africa’s border with Namibia, they’re usually looking for food, water and basic shelter after a three-hour journey on a sandy road.

What they’ll also find is a fascinating permanent exhibition by USC Design students adorning the walls of the camp – an exhibition that so impressed South African National Parks (SANParks) when it was unveiled that the organisation will now publish it in book form.

The book is intended as an educational tool and a quality keepsake for tourists interested in the different species and hunting techniques of the raptors of the Kgalagadi Transfrontier Park, which falls within a UNESCO-listed site that includes part of the Kalahari Desert.

USC Associate Director of Conservation Design Projects Kevin Todd, who has coordinated many SANParks student partnerships, said the Sunshine Coast trio involved in the Mata Mata exhibition was delighted to see the results featured so unusually, so far from home.

Lauren Siodmak, of Morayfield, also was selected to design the book Kgalagadi Raptors, based on the text of Chris Patton of SANParks and the photographs of many contributors that feature in the now-permanent exhibition.

“I was so excited to see the proofs, and so proud of that achievement,” said 29-year-old Lauren, a former chef and Burnside State High School graduate who has just completed her USC degree to launch a career change in the design industry.

“I’ve helped produce something that will be published and sold overseas, that tourists will have as souvenirs. And I learned so much about the birds. It’s amazing.”

The other Design students were Lilli Collingwood and Nikki Stewart.

Amid the exhibition’s images of curved beaks, talons and plumage, a page read: “With an abundance of food, often through mass gathering of insects, rodents, reptiles and flocking birds, the park is a banquet for these highly specialised aerial carnivores”.

Lauren, who is taking a temporary work break while expecting a baby, said USC also gave her the chance to contribute to a sun bears conservation design project, involving travel to Laos.

“USC offered real-world projects, as well as all the elements of a design degree,” she said.

Mr Todd said the students had to carefully consider location, form and context.

“They had to develop the concept with the client, design it, print it and deliver it, to a professional standard,” he said.

“It’s a joy to take this talent from USC out into the world, and gift it to SANParks.”

Another group of Design students is currently working on an exhibition about predators at Nossob Camp on the border of South Africa and Botswana, due to be installed next year depending on the lifting of COVID-19 travel restrictions. 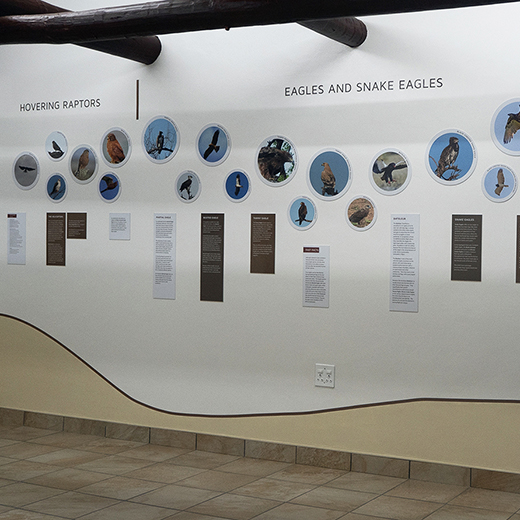