Volunteering as an amputee model for Prosthetics and Orthotics students practising their new skills was an introduction to USC for accountant David Williams.

The Brighton father of two was so impressed with the course’s real-world focus, and the diligence and commitment of its students, that he decided to enrol too.

David, 39, is now in his second year of USC’s Bachelor of Health Science with its extended major in Prosthetics and Orthotics – the only such major in Queensland.

“I’m studying towards a career that I know will make a tangible difference to the lives of people from all sorts of backgrounds who are dealing with injuries or diseases or genetic disabilities,” he said.

“I saw how practical the course was and thought maybe this was my opportunity to change jobs.

“It’s exactly what I wanted and expected. I can also use some of my business skills and my experiences as an amputee, but no-one is exactly the same when it comes to prosthetics and orthotics. What works for me may not work for you, so this career has great variety.”

David, whose legs were gradually amputated below the knees following a burns accident 20 years ago, has structured his full-time studies around casual accounting work, his wife’s work and the care of their sons who attend primary school in Brisbane.

He said studying via technology, including telehealth and webinars, was working well during the closure of the USC Sunshine Coast campus due to COVID-19 distancing restrictions, but he looked forward to the resumption of face-to-face learning.

“I like lab work, meeting the patients, fitting and adjusting the devices we’ve made, making them comfortable, seeing the difference it makes to their lives,” he said. “At this point, I’m hoping to work in paediatric orthotics, such as helping children with cerebral palsy.”

USC Lecturer in Prosthetics and Orthotics Adam Holden said the extended major suited people who were creatively or technically minded and enjoyed working with people.

“It provides students with specialist training in an increasingly high-tech area of health,” he said. “It includes client assessment, treatment plan provision, and design and manufacture of devices to address the functional limitations of people with illness, disease or disability.”

Applications are expected to open in August for USC’s 2021 intake. 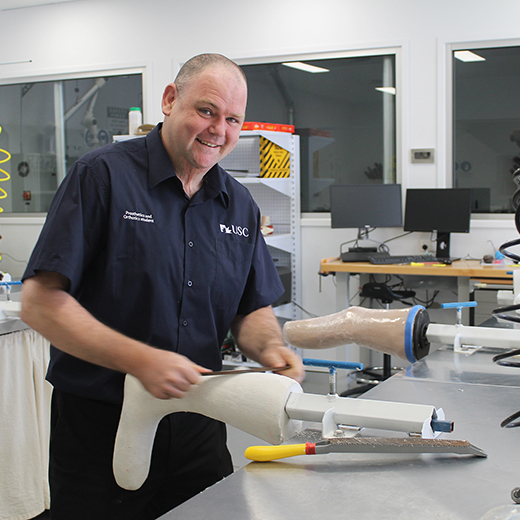 While the resurgence of COVID-19 is causing deja vu for many business owners, Fiona Roberts is looking forward to “another amazing year” in 2021.