Graduate scoops design job at the Museum of Ice Cream

The three-month internship led to a full-time job, and the 22-year-old from Palmwoods is now the company’s lead graphic designer in its marketing team, and a resident of Brooklyn.

“Every day is pretty different,” said Lilli, who was Art Dux in Year 12 at Suncoast Christian College in 2015 and completed her degree at USC Sunshine Coast in 2018.

“I have a lot of creative freedom to test out new ideas. I've worked on campaign designs, newsletters, marketing activations and even designed a bright pink ice cream truck in Times Square.”

And there were unexpected sprinkles on top for Lilli last year when one of her inspirational GIF stickers was reposted on Instagram by American celebrity Kim Kardashian.

Lilli attributed her success to her studies at USC which included several trips overseas, her first design job at Brisbane digital agency Social Cut, and a series of fortunate events.

“It's actually a crazy story of how I'm in NYC right now, but long-story-short, I travelled to New Zealand when I finished my degree, and I met a stranger at a bus stop who said his daughter was designing for a place called the Museum of Ice Cream in New York,” Lilli said.

“I legitimately thought he was kidding, because the Museum of Ice Cream didn’t sound real.

“I was in an Airbnb in New Zealand and Googled the Museum of Ice Cream, and at the top of their careers page was a graphic design internship, so I applied.

“I had some Skype interviews and was offered an internship that turned into a full-time position a few months later and, 18 months later, I’m still here.”

The Museum, which started several years ago as a pop-up business, has bases in New York and San Francisco. It aims to create interactive environments and sensory experiences “inspiring human connection through the universal power of ice cream”, according to its website.

Lilli, who majored in graphic design and minored in photography, visited Borneo and Hong Kong during her USC degree and worked on a design project now installed in South Africa.

“In my final year, I had the opportunity to go to Borneo to work at both the Sun Bear Conservation Centre and the Orangutan Centre,” she said.

“Having that foundation to my degree, of knowing design principles and software programs, and then building upon it with real experience, has strengthened my skills.”

While Lilli’s world travels have been curtailed by COVID-19 restrictions, she said there were also distinct benefits.

“It's made me super grateful that designing isn't confined to an office or a space,” she said.

“I love the flexibility of being able to work from anywhere. I also think the massive shift to digital can open up a lot of opportunities for designers.”

To see her full GIF collection, go to https://giphy.com/lillidesigns 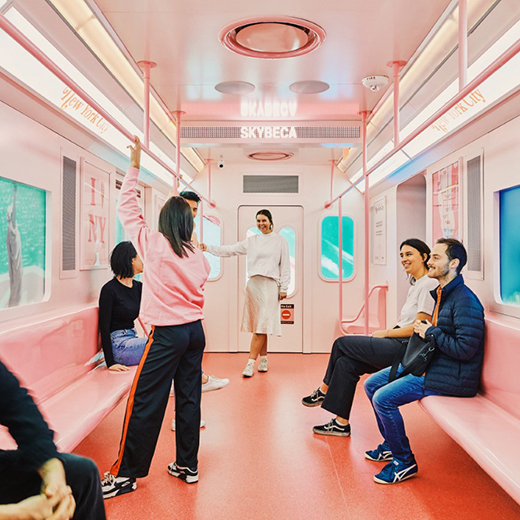