A USC researcher who uses the sounds of nature to monitor the environment and boost people’s wellbeing is collaborating on an ambitious 24-hour global radio and web broadcast to follow sunrise around the Earth this weekend.

Dr Leah Barclay, who joined USC this year as a Lecturer in Design, is an award-winning sound artist and producer whose work has taken her from installing microphones on the bottom of the Amazon River to recording birdsong in the Maleny rainforest canopy.

She said the annual Reveil (pronounced reh-vae) broadcast event would be particularly important this year, with so many people feeling isolated or disconnected from different environments because of COVID-19 restrictions.

“Reveil is an opportunity to connect with nature and reveal the changing sonic environments across our planet,” she said.

“Our research suggests that listening to environmental soundscapes can have positive effects on people’s wellbeing. Ten minutes of listening can reduce your blood pressure, slow your heart rate, and relax you in a way that not many things can, especially in lockdown.

“When we’re all isolating away from environments we can normally access, streaming the sounds of migrating whales into your lounge room, or birdsong from the rainforest canopy into your bedroom, can be of great benefit.

“What’s exciting is that we’ve never really had a time in the last 50 years where there has been such a drop in air traffic, cars on roads and boats on the ocean. We’ll hear soundscapes we’ve never heard in their natural form, with less impact from anthropogenic interferences.”

She will curate livestreams from Mary Cairncross Reserve in Maleny and underwater hydrophones in Maroochy River, Eudlo Creek and the Noosa Biosphere Reserve, in addition to streams across Japan, China and Korea.

The sounds will be broadcast for 24 hours this Saturday 2 May, from 2pm Australian Eastern Standard Time (5am on 2 May London time).

Dr Barclay has been involved in Reveil since it began five years ago as part of Dawn Chorus Day, which for decades has encouraged nature lovers in Britain to go to scenic spots to listen to birdsong at sunrise.

“This research is part of a project I lead called Biospheres Soundscapes, which I’ve brought to USC’s School of Creative Industries from the Queensland Conservatorium at Griffith University where I was based,” she said.

“I have three students in the Creativity, Design and Communication course participating in Reveil – encouraging people to engage with listening online, working directly with the team in London during the event, and then analysing feedback.”

Dr Barclay’s research into eco-acoustics and conservation technology will continue around the Sunshine Coast, and the globe, after this weekend’s event.

Her previous work has been commissioned, performed and exhibited by organisations such as the Smithsonian Museum and UNESCO, and her sound installations have been presented across the world from Times Square in New York City to the Eiffel Tower in Paris.

“My research examines the intersection of art and science using sound to understand the health of the environment, reconnect communities to nature and inspire climate action,” she said.

“I’ve done many projects on the Sunshine Coast and that’s why I was attracted to USC, as well as the opportunities to promote interdisciplinary research.

“Even if we can’t physically do fieldwork at the moment because of COVID-19, these recordings and livestreams can still capture data and give us information about the state of the planet.” 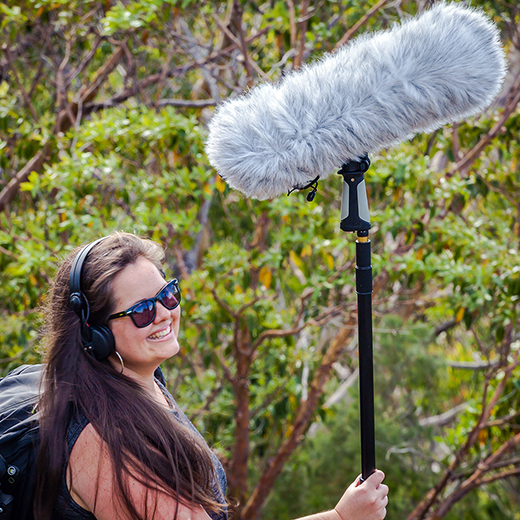