USC photography students have found themselves documenting the evolution of a global health crisis first-hand, digging deep to create content while in confinement.

Lecturer in Photography Tricia King said that while students in the Photographic Practice course began the year with almost endless options to pursue a narrative subject, they’ve since had to find inspiration in their own backyards due to government COVID-19 restrictions.

“This is not what anybody expected,” Ms King said. “But the students are really rising to the challenge and embracing it.

“As a result, I have seen great creativity and insightfulness from the students who have built compelling narratives through photography.

“These are the images that people are going to be looking back on – meaningful images that really capture the essence of what we are experiencing.”

Ms King said one student had documented his changing relationship with his grandparents as the crisis developed, including a self-portrait wearing a full outfit of personal protective equipment while visiting them.

“At the start of the year, they could have photographed anything in the world but now they have a very restricted pool of subjects.

“They have had to look deep to see what is going on around them and not overlook the smaller details, which is the basis of the creativity that emerges in confinement.”

Ms King said the class identified early on this semester that the world was changing quickly, and that they would need to adapt.

“The photo documentary assessment piece is meant to be a narrative that shadows someone as the weeks go on," she said. "But, as a class, we had to greatly reassess how we were going to achieve that while going into lockdown.

“So, we have actually documented the change in just a few weeks from going outside, to taking photos from the car only, to not going outside at all.

“As the documentary-makers of the future, the students were in a fortunate position of being able to capture history as it happened, and they discovered that there was an immense story to tell.” 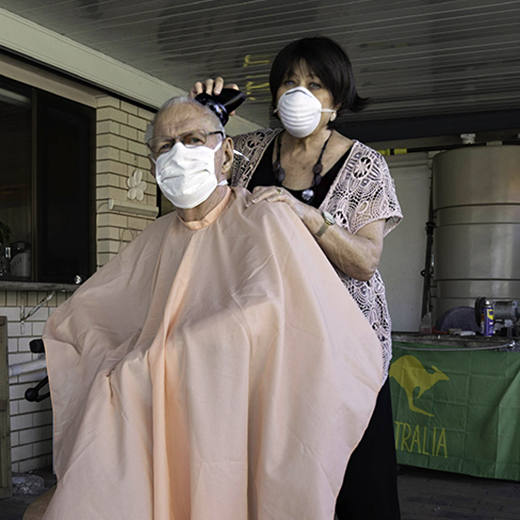