Self-confessed former rebel Kate O’Neill’s journey to becoming a USC Nursing Science graduate has been filled with challenges and setbacks – as well as tenacity and triumph.

From leaving school after Year 10, teenage pregnancies, the loss of her infant son and a battle with depression, the 27-year-old from Hervey Bay is now working as a graduate acute mental health nurse and studying a Master of Mental Health Nursing.

Kate said much of her motivation came from her mother, USC Senior Lecturer in Nursing Dr Julie Martyn, and her first child Riley who was born with health complications requiring several hospitalisations before he passed away aged three-years.

“I’m passionate about nursing and caring for others. Healthcare has been a part of my life since birth and it seems to follow me wherever I go,” said Kate, who graduated from USC Fraser Coast with a Bachelor of Nursing Science in May.

“My own lived experience has also played a major role in my desire to help others with similar circumstances, and my struggles with mental health have led to an interest in the workings of the mind,” she said.

“I’ve always been so fascinated by the fact that mental illness does not discriminate – nearly everyone can or will experience some form during their lifetime.”

After leaving school and home aged 16, Kate said she had a few rebellious years, and became pregnant with her first son at 17, with her second son born two years later.

“After Riley passed away, I struggled with addiction and severe depression which led to an admission into the mental health inpatients unit where I started my recovery journey.”

Dr Martyn said that when Kate decided to enrol at university, she knew her daughter had her work cut out for her.

“After all, her child had died not 12 months before, she was still grieving, had a 2-year-old and another son born just three days before she started her Nursing studies,” Dr Martyn said.

“Kate’s pathway to completing her degree was not straightforward, however she got there through tenacity and hard work.”

She said she drew her own inspiration from Kate’s experiences.

“I was lamenting the effort involved in completing my doctoral studies and Kate said to me that ‘if PhD’s were easy Mum, then everyone would have one’,” Dr Martyn said.

“I use her words when I encounter students who are struggling to study amongst life's other challenges and they don’t know what to do.

“I say, do one thing at a time but keep going until they are all done. Most students can finish a degree, they just need to stick with it as it’s not a sprint; it is a marathon and it’s worth it.”

The pair said they established clear boundaries during Kate’s time at the Fraser Coast campus. “Mum treated me the same as her other students and did not give me any extra assistance,” Kate said.

“Being at the same campus was a little awkward at first but looking back now I believe it brought us closer together. When I was a teen, my mum was the last person I wanted to be friends with but now she is my best friend.”

Working with inpatients in an acute mental health unit, Kate said she gained great satisfaction from being part of someone’s recovery.

“I love being able to listen to people’s stories without judgement or bias, reminding them of their strengths and positive attributes and helping with coping strategies so they can better manage their mental health independently.” 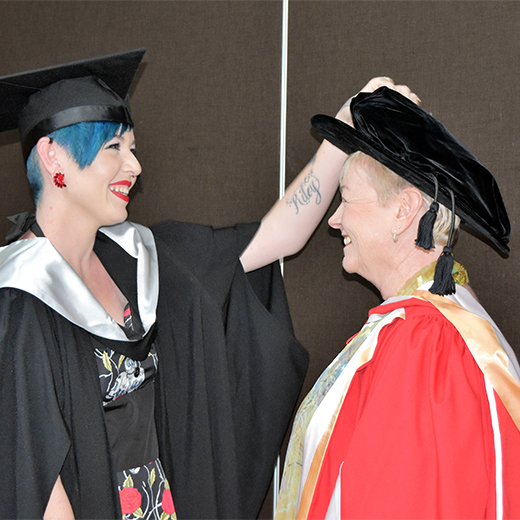