Sunshine Coast Lightning fans have been invited to celebrate the team’s amazing 2019 season at a free Community Thank You event at USC Stadium on Monday evening (16 September).

USC will host the event from 5.30-7pm to give fans the chance to meet players and coaching staff of the ladder-topping Suncorp Super Netball team.

Lightning finished the 2019 season as minor premiers after winning 12 of its 14 matches in the regular season, two more than its nearest rival, the NSW Swifts.

The team will take on the Swifts in the Grand Final on Sunday 15 September at the Brisbane Entertainment Centre, where it will aim to secure its third consecutive Suncorp Super Netball title.

Professor Hill encouraged fans to attend Monday’s community event and bring along one item each to be autographed by the entire playing group.

“Regardless of the outcome of the grand final on Sunday, Sunshine Coast Lightning has plenty to celebrate from this season,” he said. “Our university and the Sunshine Coast community are just so proud of what this team has achieved.”

Lightning CEO Danielle Smith said Monday’s Community Thank You event is a highlight in the club’s annual calendar, as players and staff acknowledge the unwavering support of the Sunshine Coast region.

“The club is forever grateful for the outpouring of support from the entire Sunshine Coast community throughout our journey so far,” she said.

“Our supporters are the linchpin of our club and play a unique role in the success and culture of Lightning. It will be fantastic to have our community celebrate the 2019 season with us on Monday.

“It also provides the community with the opportunity to pay tribute to our beloved departing coach Noeline Taurua.”

This season saw an important expansion of USC Stadium – funded by the Queensland Government – that increased its capacity from 2,000 to 3,000 spectators, making it an even more intimidating venue for visiting teams.

Sunshine Coast Lightning is a joint venture of USC and the Melbourne Storm NRL club. 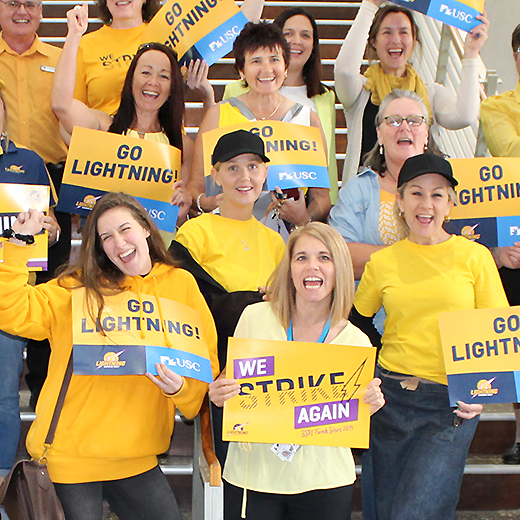