About 900 bird nests, some dating back to the late 1800s, are helping USC researchers gain rare insights into how birds interact with human materials – both dangerous and safe.

“We don’t have time machines to go back over 100 years to figure out how long animals have been using debris for nest building – these historical nests give us that opportunity,” Dr Potvin said.

“The nests are essentially a snapshot of animal behaviours from generations of animals long gone and there are not many other studies that can claim to do this,” she said.

“The specimens have been sourced from all over Australia and some internationally and we believe this is a great use of an understudied and underused resource,” Dr Potvin said.

The study aims to determine whether nest-building materials have changed over time and how birds use potentially dangerous debris.

“Some human materials can injure birds without being ingested – fishing line for instance can get caught around bills, wings or feet, and cut off circulation resulting in amputation and possibly death,” Dr Potvin said.

Researchers are also analysing whether certain species use human materials more than others and if usage depends on their habitat, such as urban, farmland or bushland sites.

“These findings could help to establish whether efforts to clean up or arrest production of certain kinds of rubbish should be targeted towards species that are particularly prone to collecting debris for nesting,” Dr Potvin said.

Analysis of the 892 nests is expected to be completed next month with the findings released by the end of the year.

“While we cannot reveal any preliminary observations at the moment, we can say we have observed several unusual items that birds seem to like in their nests,” Dr Potvin said.

It is not the first time Dr Potvin has used museum nest collections to investigate human impacts on bird species.

In previous studies, she found that egg and nestling survival, and growth and development suffered when nests were subjected to human-generated noise, and that nests offered little respite to birds wanting to escape the damaging effects of traffic sounds. 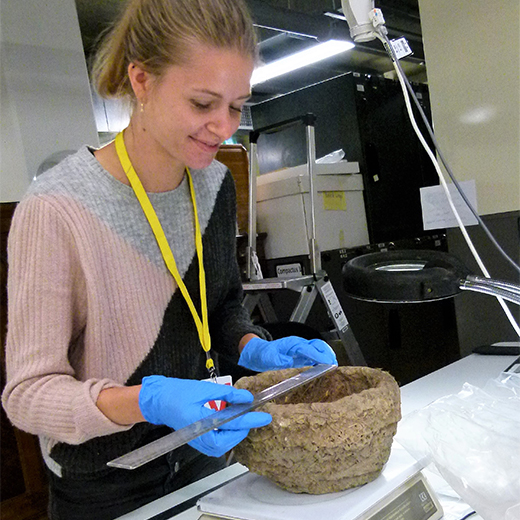