A Caloundra firefighter and flooring tradesman aiming to become a paramedic is celebrating with two USC colleagues after their team came third in an emergency simulation competition against universities from across Australia and New Zealand.

Two USC teams, each comprising three Paramedic Science students, were among the eight teams that made the finals of FernoSim 2019, held in Brisbane over two days this month.

The fast-paced series of simulated challenges, ranging from a poisoning to a traffic crash, tested students’ academic learning, clinical skills and teamwork.

Second-year students Phil Williams, 37, Hayley McCulloch, 20, of Mooloolaba and Javier Vega-Sanguesa, 25, of Paddington in Brisbane were surprised and delighted to take bronze, after none of them had even organised the second day off work to participate in the final.

Phil said while he was accustomed to making decisions in pressure situations as a firefighter, the challenges were intense for every participant.

“We had to use advanced life support skills, put in airways, do CPR, package a suspected spinal injury on to a stretcher, communicate with patients and bystanders,” he said.

“Our confidence has grown with the awesome feedback from the judges.”

He said the competition directly related to what they were learning at USC.

“We do simulations regularly in the facilities on campus at Sippy Downs because that’s exactly what we’ll be facing in the real world,” said Phil, who acknowledged the Sunshine Coast University Paramedics Association for sponsoring the team’s fees.

The father of five, whose wife is a USC Nursing Science graduate now working at a local hospital, said he wanted to add paramedicine to his career to help people on a medical level.

USC Paramedicine Discipline Leader Dr Nigel Barr said he believed it was the best result the University had achieved in the annual competition run by a company that made medical equipment for the hospital industry.

“It validates our world-class facilities and our teaching, that we are producing candidates who can perform at that level,” he said. 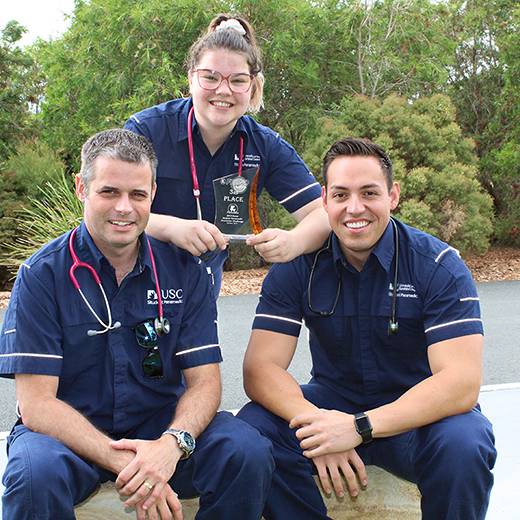