A swimming great and an outstanding surf lifesaving champion have been inducted into the Sunshine Coast Sports Hall of Fame.

Brittany Elmslie and Steven Meredith were honoured for their outstanding achievements in their respective sports at a special ceremony at USC last night.

The ceremony also featured the presentation of two Certificate of Merit awards to well-known Sunshine Coast identities, Ian Grant (water skiing and soccer) and Daphne Bickle (softball) who have both worked tirelessly contributing to the success of sport on the Sunshine Coast.

Brittany first represented Australia in swimming at junior international meets as a teenager. She made her first senior international team in 2012 as an 18-year-old, when she was selected for multiple Olympic relay squads.

At the London Olympics, she earned a gold medal as a member of the 4x100m freestyle relay team and two silver medals for her preliminary swims in the 4x200m freestyle and 4x100m medley relays.

After London, Brittany was a fixture of the Australian relay teams, earning two more Olympic medals (including gold in Rio in 2016 as part of the world-record-breaking Australian 4x100m team), three long course and two short course World Championship medals, two Pan Pacific Championship medals and three Commonwealth Games medals. In 2016, she was named the Sunshine Coast Senior Sports Star of the Year.

Steven was named the 2000 Sunshine Coast Senior Sports Star of the Year. 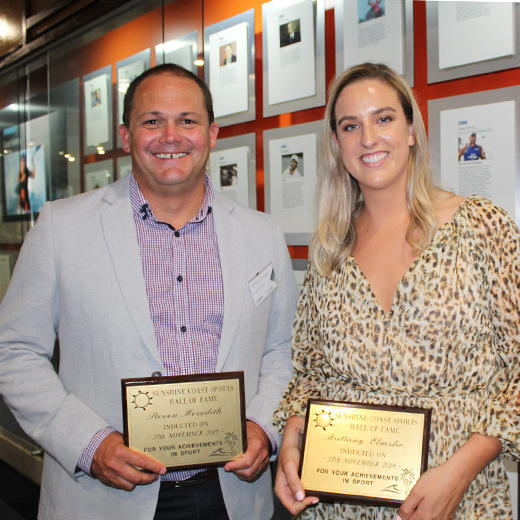