USC has named one of its most iconic buildings in honour of founding Vice-Chancellor, Emeritus Professor Paul Thomas AM.

Professor Thomas, who retired from the position in 2010, joined more than 100 people with past and present links to the University at the library naming ceremony on campus at Sippy Downs on Thursday 2 May.

The function to unveil the “Paul Thomas Library” was held near the steps of the striking building in the middle of USC’s 100-hectare flora and fauna reserve.

USC's Council recently approved this acknowledgement of Professor Thomas’s outstanding contributions in the 16 years following his appointment as planning president of the new greenfield university in 1994.

He became inaugural Vice-Chancellor in 1996 and led USC through massive growth in enrolments and degree options to great success, particularly in combating the talent drain from the Sunshine Coast and boosting the region’s status and economy.

The three-storey library, with its jagged roof line and slatted Queensland-style verandah, won multiple awards including the Sir Zelman Cowen Award for Public Buildings in the year it opened, 1997.

It reflected Professor Thomas’s vision for the campus as an innovative, welcoming and distinctly subtropical blend of the built and natural environment.

Two of the architects who designed the library, Noosa-based John Mainwaring and the University of Newcastle’s Professor Lawrence Nield, will speak at the ceremony.

Vice-Chancellor Professor Greg Hill, who was deputy vice-chancellor in the last five years of Paul Thomas’s leadership, said the library naming was a fitting tribute to the commitment, determination and ethos of Professor Thomas. 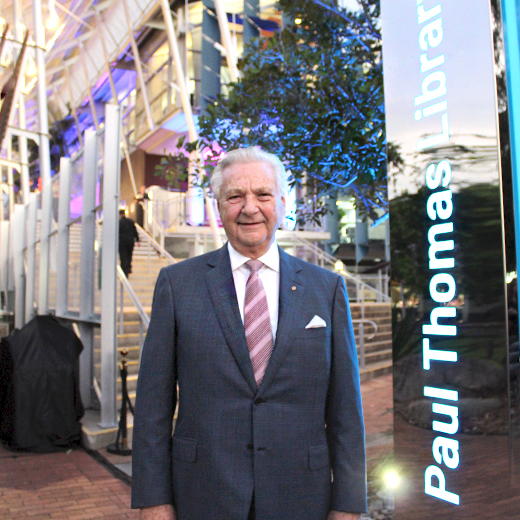