A study measuring the size of plastic rubbish ingested by seabirds in Australia and New Zealand has found 90 percent fall within the “danger zone” of getting trapped in the bird’s gut.

The joint research by the University of the Sunshine Coast, CSIRO and the University of Tasmania is one of the first to measure the dimensions of rigid plastic items ingested by various species of petrels, the world’s most threatened bird group.

“We discovered that size does matter, with 90 percent of the plastics ingested by these sea birds falling within the range of 2-10 mm,” USC marine biologist Dr Kathy Townsend said.

“These sizes are much smaller than we originally thought, and worryingly, fragments of plastic less than 10 mm are the most abundant floating litter in the ocean,” she said of the findings, published in the latest edition of the Marine Pollution Bulletin.

“Items of this size are small enough to make it past the first part of the gut into the stomach but are too large to make their way out through the rest of the small intestine, causing blockages that can result in death.”

The largest piece of plastic was over 5 cm long – the size of a USB stick.

The findings come as another USC research project uncovered further evidence of the dangers of plastics pollution to marine turtles and sea birds – including an almost intact shopping bag dating back almost 50 years found in mangroves near Moreton Bay.

Dr Townsend said the Coles Farmland bag was one of several old plastic bags and item rubbish collected during marine debris surveys along the SE Queensland coastline by a University research team.

“The logos on the plastic packaging are crystal clear allowing us to determine how long the items stay polluting our oceans and waterways, said Dr Townsend, who is using the survey results to measure the impact of Queensland’s new ban on single-use plastic bags.

“As we can see, plastic debris can last a very long time, increasing the ingestion risk to sea turtles and sea birds,” she said.

The Coles Farmland logo was used between 1971-79, making one of the bags found up to 48-years-old.

“A Woolworth’s plastic bag containing rubber gloves and a sarsaparilla can was found on the beach near Hervey Bay that we could date back to between 1976-1987 – making it at least 32-years-old.”

Dr Townsend said these findings and earlier studies into the impact of ocean debris on marine life highlighted the need to reduce single-use plastic production and usage, increase recycling and prevent plastic from making its way to the sea. 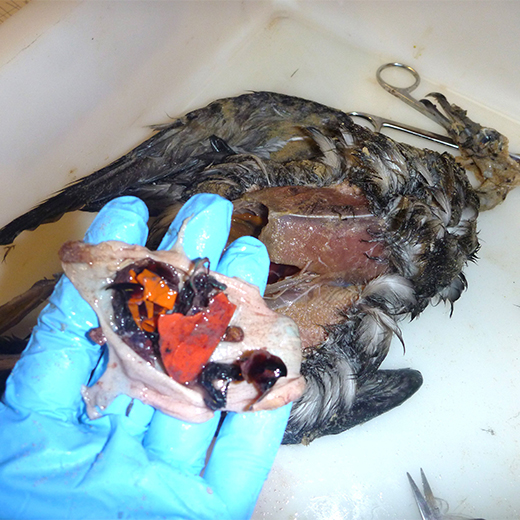 Avoiding a sea of regret

Exactly what is the state of our oceans? And is it too late to turn back the tide?