Growing up in a poor Nepalese village, Dr Ratna Paudyal never expected to one day gain the highest university degree possible while living a world away in the Fraser Coast.

“It has been an extraordinary, challenging and rewarding journey,” the USC Lecturer in Accounting said yesterday (1 May) when he was conferred a Doctor of Philosophy at a University graduation ceremony in Hervey Bay.

“I never dreamed that I could achieve a PhD, but always believed that continuous dedication and a habit of not giving up can take us on new adventures in our lives,” Dr Paudyal said.

“I am boy who grew up in a rural, remote region of Nepal, whose parents are illiterate and who has English as a second language. If I can do it, we all can do it.”

His belief in the power of education has seen him present his doctoral research on the importance of education and health care in breaking the poverty cycle in impoverished nations at an international conference at Harvard University.

He has been awarded two national teaching awards, and next month he will lecture for two weeks at Guangdong Women's Polytechnic College at China Women’s University.

“I was not alone in this journey,” he said. “I never had the dream to live in Australia or planned to become a university lecturer, but it all came about from other people.”

While growing up in a one-bedroom house with 12 siblings, his mother was his biggest inspiration to embrace learning.

“Even though she could not read or write, she encouraged me to use education to broaden my horizons and seek a happy, prosperous and rewarding life,” he said.

At 16, he moved to live by himself in Kathmandu and worked to fund his studies in senior school and then university.

A meeting with Rotarian Roy Bunney from central New South Wales, who visited his village on a humanitarian mission in 1996, was the beginning of a long-term friendship and the start of his journey to Australia.

He gained a Master of Accounting and Master of Professional Accounting at the University of Western Sydney (UWS) in 2011, receiving an award for the highest grade point average among graduates, before starting his PhD.

“My parents, teachers from Nepal and Australia, my wife Yashoda, my neighbours, friends, long-term acquaintances from Rotary Australia, and my university colleagues and students have all contributed to my success in many ways,” he said.

“I am so thankful to all these amazing people who assisted and encouraged me to work with them to achieve this goal and many others.”

Many of them attended yesterday to watch Dr Paudyal receive his PhD from USC Chancellor Sir Angus Houston, including members of Rotary clubs from Hervey Bay and Somersby, New South Wales, and academic supervisors and colleagues from UWS and USC.

The ceremony also celebrated the academic achievements of the largest cohort of students to graduate from USC’s Fraser Coast campus, with more than 40 students receiving degrees in Nursing Science, Commerce, Business and Primary Education.

It also featured the presentation of the first Chancellor’s Medal for a graduating Fraser Coast student to Kerri Hetherington and an Honorary Senior Fellowship to 93-year-old Hervey Bay scientist Dr Vernon Harris. 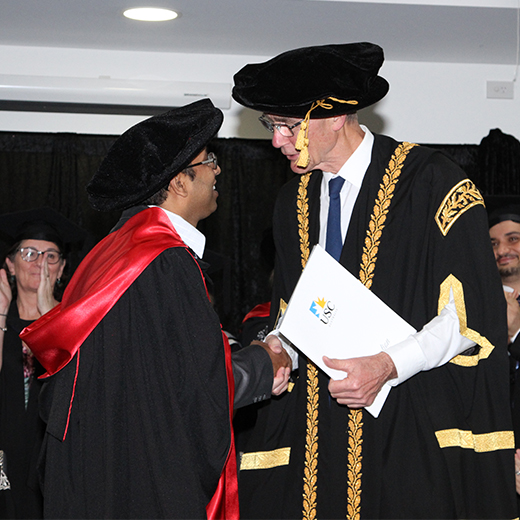 Research by USC Fraser Coast Business student Olivia Hay on illicit drug use at music festivals has been showcased by one of Australia’s peak social marketing bodies.

Senior high school students in the Fraser Coast region wanting an early start to their local university journey can get face-to-face advice from USC Fraser Coast staff and students on Thursday 19 March.