With his creativity flowing from postgraduate study in writing, Hervey Bay music teacher Caleb Rostedt is composing a debut book series about a teenage angel preparing for an apocalyptic future.

Caleb graduated from USC recently with a Master of Professional Practice (Creative Writing) and said the program’s intensive writing workshops – mentored by highly-qualified academics and published authors – were the impetus he needed for his novel.

“Making writing my novel a core part of my study helped me to prioritise it in a most satisfying way, and the creative endeavour was immensely fulfilling,” the 30-year-old father-of-three said.

“The system of deadlines and workshopping was profoundly helpful to my writing process, as it is too easy with everything else going on to put my writing dream last on the list.”

The planned book series covers the adventures of a weedy teenage boy who dies heroically saving a girl from oncoming traffic and is immediately inducted into an angel battle school to prepare for an impending apocalypse.

“I’m still shy of the halfway mark, but the amount that my initial idea has evolved into something unique and mesmerising that will expand over a four-or five-book series is heart-warming and exhilarating to me,” Caleb said.

He said the greatest benefit gained from the program was developing a level of critical self-reflection that allowed him to adapt and grow his writing in a continual, positive direction.

Creativity and music have always been key elements of Caleb’s life.

After growing up in Hervey Bay and spending a few years as a self-funded missionary in Taiwan, he worked as a head guitar teacher for a Sydney music school while completing degrees in Music (Sound Art/Voice) and Arts (Creative Writing/Mandarin Chinese/Film).

He now works as a freelance writer and runs a music school from his Hervey Bay home, using a unique guitar method that he designed based on his experiences as a music coach and expanded to include piano, voice, song writing and composition.

“I am also very active in my church,” Caleb said. “Besides regular musical performances, I have served in a range of capacities from choir director to youth leader, Sunday school teacher and clerk.”

With a passion for both music and creative writing, Caleb said he was uncertain in which field to continue post-graduate study until his father suggested USC’s Creative Writing Master program, which has an option of online studies.

“My father, who has always made an example of prioritising tertiary education and is doing a law degree to take him to retirement, said I might like to think about it. Two days later I enrolled,” Caleb said.

“While I’m taking this year off from tertiary study, I hope to continue with a doctorate, but how soon depends on how quickly or slowly my career as a professional writer takes off,” he said.

“Ultimately my goal is to work from home as a published author and composer, while home-schooling my children and living totally self-sustained.” 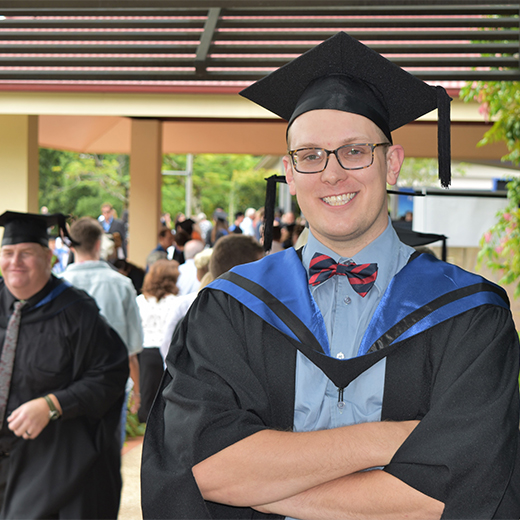 Two USC Journalism students who recently secured full-time reporting jobs in a challenging media landscape say the secret to their success was embracing every opportunity to gain real-life skills through their degree.