Her initial plan was to become a teacher but, after her fiancé suffered a serious eye condition, USC graduate Emma McCarthy decided to swap the classroom for the hospital ward.

The 23-year-old from Hervey Bay graduated from USC this month week with a Bachelor of Nursing Science and is working in Monto, inland from Bundaberg, after securing a graduate registered nurse position with the Wide Bay Hospital and Health Service.

Emma, who studied at USC’s Fraser Coast campus, also received a University Commendation for Academic Excellence at the graduation ceremony in Hervey Bay.

“I originally went to university to study education, but when my fiancé ended up in a Brisbane hospital I was exposed to a side of healthcare I had never experienced before,” Emma said.

“Something clicked when I saw him being taken care of by the nurses and I knew I had finally found something I was truly passionate about,” she said.

“I changed my enrolment and, before I knew it, I was practising on mannequins at the University’s nursing science labs and going on clinical placements within the Fraser Coast.”

She said it was a wonderful feeling to now be working as a Registered Nurse and being able to put the theory into practice after three years of study and placements.

Her new role involves provide nursing care to inpatients at the Monto Health Service, a facility with 14 acute care beds located in the small rural service centre, inland from Bundaberg.

“Being a small hospital, we also manage emergency presentations, attend to outpatient appointments and dispense emergency medication to the public when the local chemist is closed,” said Emma, who will complete a 12-month contract at the Health Service.

“Rural nursing is challenging however I am learning so much. I am just trying to see as much as I can and soak up as much information and experience as possible,” she said.

“The most rewarding aspect is seeing a difference in patients’ wellbeing and health after they are discharged. It’s a nice feeling knowing that I played a part.”

After completing Year 12 at Urangan State High School, Emma said she was not keen on moving to a large city to gain a university education, so she enrolled at USC’s Fraser Coast campus.

“I really enjoyed being able to walk around campus and know almost everyone in the Nursing Science program and being able to spend that little bit of extra time during lectures speaking with the lecturers because class sizes were smaller,” she said.

A highlight of the degree was being selected to take part in USC’s accredited international nursing placement in Indonesia to help deliver essential health care in remote villages in Java.

“While it was definitely a big culture shock, I gained invaluable experience, made some amazing friends and learnt a lot about myself in a short amount of time,” Emma said. 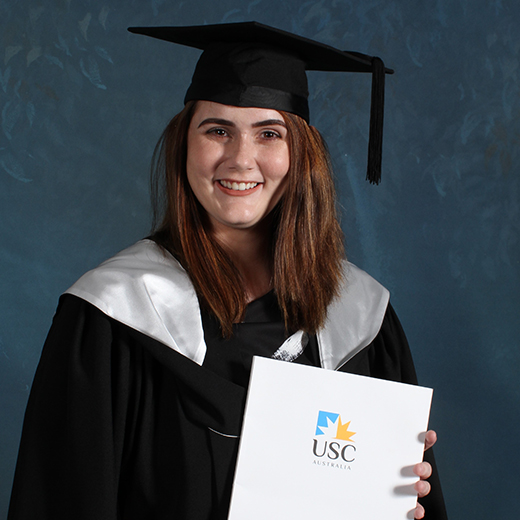 Superheroes to the rescue of chemistry students

USC academics have devised a cunning plan to harness the power of superheroes to help first-year Chemistry students better understand the complex concepts of the periodic table of elements.

While some school leavers have trouble deciding their next move after high school, it has been an easy choice for Mackenzie Biden of Hervey Bay – she is following her brother Thomas into a career as a teacher.