Disease-carrying mosquitoes in the Wide Bay will soon have 1000 good reasons to be very afraid.

Tomorrow, the 1000th micro-bat box will be installed in the region as part of a joint venture between USC and the Fraser Coast Micro Bat Group.

USC Animal Ecology and Environmental Science students will help members of the Fraser Coast Micro Bat Group erect 50 poles with two micro-bat boxes or tubes on each at the property of long-time Hervey Bay farmer Ray Christensen at 90 Chapel Road, Nikenbah from 10-11 am.

The boxes provide shelter, roosting and nesting sites for the tiny, threatened flying mammals who feast on mosquitoes and other pest such as weevils, midges and flying termites.

Some Queensland micro-bat species are known to eat an average of 400 mosquitoes in a single night.

Dr Potvin said the boxes were a natural and relatively cheap alternative to chemical insect control, with each box costing around $40 and capable of housing families of two to 10 bats.

Dr Potvin and USC students are monitoring the region’s boxes and recording data on regional bat populations and the health of local ecosystems. She said the findings would provide a platform for ongoing research. 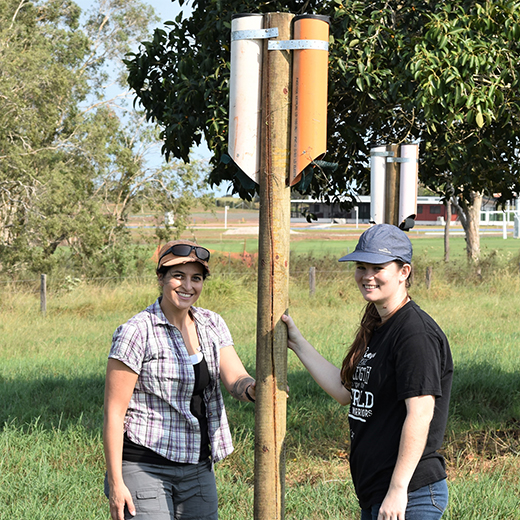