Three talented USC postgraduate students have been given a financial boost thanks to the Rotary University of the Sunshine Coast Community Fund.

The fund is provided for by all 16 Rotary Clubs on the Sunshine Coast and supports three $4,000 Rotary Postgraduate Scholarships each year.

USC Vice-Chancellor Professor Greg Hill said there have been more than 50 scholarships awarded since 2001 supported by more than $183,000 raised by Sunshine Coast Rotarians and contributed to the fund.

“This is testament to the vision and foresight of Rotary which is making a significant and lasting impact through this initiative,” Professor Hill said.

“The research it supports has enhanced our region and beyond in many fields including health, business, education and the environment.”

Brittany, 23, said while the scholarship would allow her to attend a major marine conference in Western Australia later this year, the recognition also holds sentimental value.

“My late grandfather Noel Bridges was a Rotarian, and proudly led Mooloolaba Rotary as club president during 2000-2001,” Brittany said.

“He attended Rotary every week and dedicated his time to community and I know he would have been so proud of my academic achievements and community involvement, so to receive this Rotary scholarship means even more to me.”

Fellow academic recipient Elin Pollanen, 28, moved from Sweden to the Sunshine Coast to study psychology four years ago and is now completing a Master in Clinical Psychology.

“My goal is to one day work as a clinical psychologist for Doctors Without Borders and offer my services in Kenya and Tanzania where I have previously volunteered,” Elin said.

“This research will investigate the components of the trail mucus of two snail species that are significant agricultural pests in the grain and legume growing districts of Southern Australia, costing the industry around $40 million dollars annually,” Kate said.

“The scholarship will help to fund travel to conferences and South Australia where the snails are prevalent as well as generally help alleviate the financial burden of being a full-time student.” 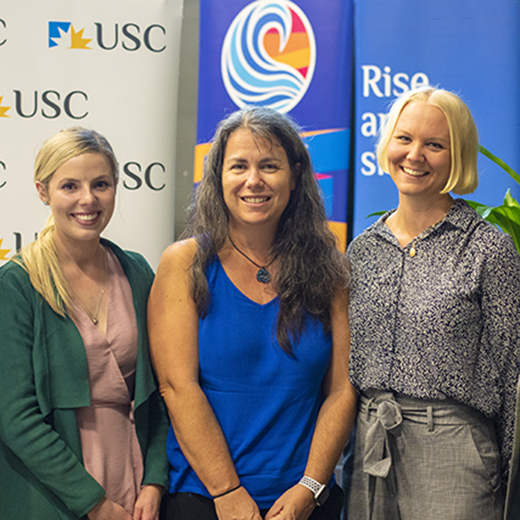