Sun bears are cute, reclusive, not at all cuddly, and at great risk of extinction.

The world’s smallest bear will be the topic of the upcoming Lounge Bar Lecture at Buderim Tavern on Wednesday 3 July from 6pm to 7.30pm.

The event will feature Dr Wong Siew Te, founder of the Bornean Sun Bear Conservation Centre and Sarah Pye, the Doctor of Creative Arts candidate who is writing his biography as part of her research.

“What captured me the most about Wong is that he’s one man making a huge difference,” she said.

“He’s charismatic and fighting hard to save a species and, while there is enormous amount of apathy from people who think they can’t help, his point is that you can.”

The conservation centre provides an enclosed natural habitat for 43 bears, many of which were surrendered pets.

“Sun bears are poached for their claws, hands and gall bladders for Chinese medicine and, if a parent is killed, the baby is usually sold into the pet trade,” Ms Pye said.

“But sun bears are very unfriendly to humans. They look gorgeous and cuddly and they are the smallest bear in the world, but they can be very vicious as they grow. So, when people take them as pets it doesn’t take them long to realise it was a bad idea.”

And because sun bears are notoriously difficult to find in the wild, no one is sure of just how many are left in the world, Ms Pye said.

“Their numbers are predicted to decline by 30 percent in the next 30 years due to poaching and habitat loss, and whether that means they will be completely wiped out is unclear.”

Dr Siew Te is in Australia for a project with Taronga Zoo in Sydney but is making a special trip to the Sunshine Coast – organised by USC International – to meet with longstanding project partners at USC.

USC students have worked with the centre since a partnership formed in 2013, with Design students creating interpretive signage for the centre, Communications students creating an adoption program, and Animal Ecology students conducting research. The program has even caught on, with Engineering students working on infrastructure for sun bears at a similar centre in Laos.

“I value the partnership with USC because it helps me make a difference in the lives of sun bears, and the Bornean rainforest,” Dr Siew Te said. 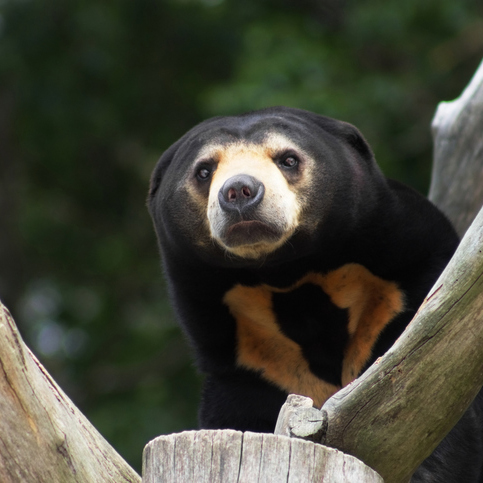