Artwork inspired by gift of giving - University of the Sunshine Coast, Queensland, Australia

Indigenous USC student Kelly Hansen from Gympie created the art piece for Dr Rustum Sethna and his wife Helen as an act of giving back after receiving a $2,000 bursary donated by the couple.

“Meeting the Sethnas I discovered they were heavily involved in the arts and that gave me the inspiration for my gift,” said Ms Hansen, who is about to enter her final year of study.

“I’ve never been trained as an artist, but painting is something I have enjoyed doing all my life as a way of expressing myself,” said the 39-year-old, whose other interests include singing and song writing.

The Sethnas have generously supported USC’s academic programs and Art Gallery for more than a decade and in 2017 were honoured with Honorary Senior Fellowships for their contributions.

They are also active in many community organisations, including the Caloundra Regional Gallery and Events Centre Caloundra.

The Dr Rustum Sethna Social Work Bursary is valued at $2,000 and is presented each year to a full-time undergraduate student enrolled in Social Work.

“Dr Sethna has said their donations to USC and other groups are their way of giving back to the arts and learning, so this is my way of doing something similar for them,” Ms Hansen said.

“It might seem little but the actual ripple effect of giving this painting has been quite significant,” she said.

“It has led to a friendship with the Sethnas, and they have helped me make connections with others in the community and the arts, which has provided me with further opportunities,” she said.

Ms Hansen, who is from the Gunggari People of Mitchell in western Queensland, said her painting incorporated elements of Aboriginal art in which the circles represented communities.

“It displays diversity as there is no consistent pattern throughout, and this expresses that communities are diverse and function differently,” she said.

“The lines represent groups of people trapped in systems, and demonstrate that some, for example, disadvantaged groups such as Indigenous people, face barriers.

“I have used some traditional colours which are part of my cultural heritage and a splash of ’80s colour, as that was the era that I grew up in,” she said. 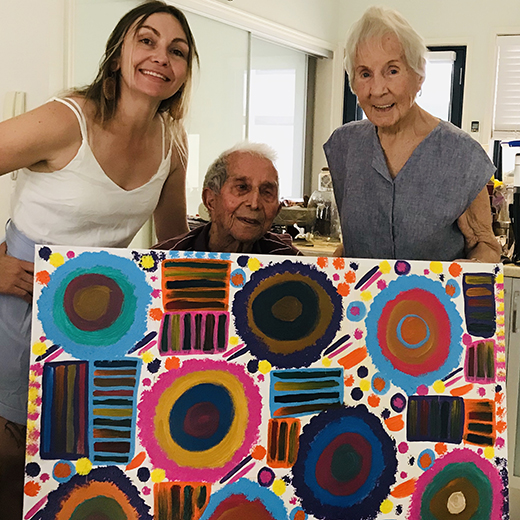 Young people at risk or experiencing homelessness in the Gympie region will soon be able to access services and support with the help of a new mobile phone app.

An Indigenous USC PhD student is taking on the complex task of bringing to light the history of Queensland’s First Nations people that has been hidden in state archives in a bid to amplify their voices in historical narratives.

World of fashion to be revealed at free lounge lecture

Find out what it takes to dress rock stars such as Lady Gaga and design clothes for leading fashion houses at a free USC lounge bar lecture in Gympie.