Identical twins who have “always done everything together” – from school to hobbies to university – will officially graduate with their USC science degrees tomorrow, Wednesday 10 April.

The 2014 Maroochydore State High School graduates will be among more than 1,800 USC students graduating this week at 12 ceremonies at Matthew Flinders College Performance Centre, Buderim.

The pair, who chose USC for the reputation of its science-based degrees and its closeness to home, are now living apart after Mackenzie moved to Hervey Bay in February for a new job.

He gained the position of exercise physiologist at Hervey Bay Physio and Allied Health after responding to an online ad a month after finishing his Bachelor of Clinical Exercise Science.

“I liked applying the theory of my courses in placements at clinics in Rockhampton and Bribie Island during my degree,” said Mackenzie, who received a Vice-Chancellor’s Merit Scholarship worth $12,000 over the four years of his degree.

“A lot of people in my courses got jobs towards the end of fourth year and my last placement at the USC Gym was instrumental in giving me the confidence to think, ‘I’m ready to leave uni and get a job’.

“My interest is cardio-pulmonary rehabilitation and that’s a high priority with Hervey Bay’s ageing population. I’ve met a wide range of clients, many post-operative, which is great for my professional development too.

“I had a lot of sports injuries when I was younger so it’s great to give back and show people how low-impact exercise programs can get them back to doing what they love.”

The brothers have moved on from their soccer-playing days but retain a love of adventurous outdoor activities, particularly water sports.

Riley is building on his Bachelor of Science this year, returning to study Honours at USC while working two casual retail jobs.

“I’m studying the effects of climate change and coastal development on the behaviours and distributions of mudskippers,” Riley said.

Mudskippers are small amphibious fish that walk and skip on their fins on mudflats and mangrove roots at low tide.

“I grew up loving animals and spending time in nature while surfing, freediving and spearfishing, which was made easy by growing up on the beautiful Sunshine Coast,” he said.

“My degree was great. The professors were really knowledgeable and experienced in their areas and my course had plenty of field trips.

“I also spent a semester on exchange studying at the University of Wyoming which was one of the best experiences of my life.”

The twins, who recalled amusing cases of mistaken identity on campus at Sippy Downs due to their similar appearance, thoroughly enjoyed sharing their time at uni.

“It was pretty cool,” said Riley. “We studied two different areas of science (environment and health) but we had a few first-year classes together, like chemistry, physiology, and communication and thought.”

Mackenzie added, “We have a healthy competitiveness and we never fight. We look out for each other.” 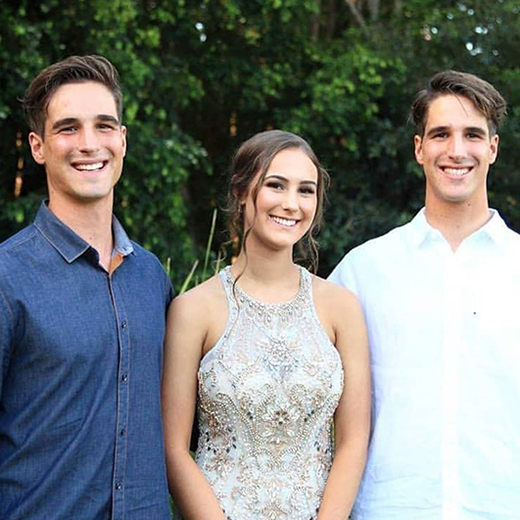