A 93-year-old zoologist from Hervey Bay who has devoted his life to studying microscopic marine invertebrates will become an Honorary Senior Fellow of USC.

Dr Vernon Harris has discovered more than 40 new species of copepods, a marine species previously unknown to science, that he collected from New Zealand, Japan and Australia – including some from waters around Hervey Bay.

USC Vice-Chancellor Professor Greg Hill said Dr Harris would receive the honorary title at a Fraser Coast graduation ceremony on Wednesday 1 May in recognition of his commitment to scientific discovery and his willingness to encourage a new generation of learners.

“Dr Harris is an inspiration and mentor to Fraser Coast-based scientists and academics,” Professor Hill said.

“Nursing Science students at USC Fraser Coast are also the beneficiaries of his strong belief in education.”

Three years ago, Dr Harris established the first donor-supported award for USC’s Fraser Coast campus through a $10,000 donation in honour of his late wife Lucy and her long, distinguished international career as a nurse.

Conducting his research from a private laboratory set up in the bedroom of his Hervey Bay retirement villa, Dr Harris uses a microscope to examine, illustrate and record species of the little-known creatures that measure between 1-2 millimetres in length.

He still prepares manuscripts for publication in international academic journals and is currently writing a book on copepods for the Smithsonian Institute in Washington.

USC Fraser Coast medical scientist Dr Ruth Newby is one of several researchers from the region who regularly meets as a group with Dr Harris.

“At these sessions we enthuse about the sciences, discuss research generally, share our own latest research projects and draw great value from Vernon’s wealth of knowledge and experience,” she said.

“We are all inspired by Vernon’s love of science and research and his continuing contribution to scientific endeavour.”

USC’s Fraser Coast graduation ceremony will be held in ceremony in the upstairs ballroom of the Beach House Hotel, Hervey Bay on Wednesday 1 May, at 4pm. 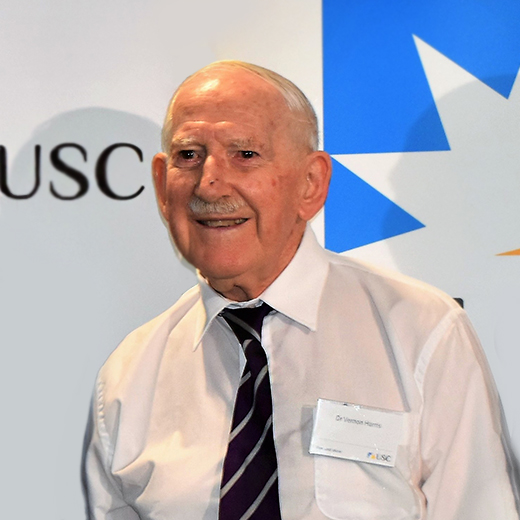