USC will stage a graduation ceremony this Wednesday to celebrate the academic achievements of its largest cohort of students to graduate from the University’s Fraser Coast campus.

The ceremony will also feature the presentation of the first Chancellor’s Medal for a graduating student from Fraser Coast, the conferral of a PhD to an award-winning Fraser Coast lecturer, and an Honorary Senior Fellow for an inspiring Hervey Bay scientist.

More than 40 students will receive degrees from USC Chancellor Sir Angus Houston at the ceremony in the upstairs ballroom of the Beach House Hotel, starting at 4pm. Media are invited to attend.

Several of the students who are graduating in Nursing Science, Commerce, Business and Primary Education will also receive USC Commendations for Academic Excellence.

USC Vice-Chancellor Professor Greg Hill said the graduation would be a proud moment for USC, which began delivering study programs at the Fraser Coast campus in 2016 as part of a long-term investment in education in the region.

“USC Fraser Coast has grown substantially in the past three years and it will be wonderful to witness our largest group of graduating students to date cheered on by proud friends, family and the community,” Professor Hill said.

“As a university we are proud to bring greater education opportunities to regions where choices were previously limited,” he said.

“We are working to produce graduates who can innovate in ways that will help the Fraser Coast region grow and prosper.”

There are currently 630 students studying at USC Fraser Coast this semester, and another 155 students from the region enrolled at the University’s Sunshine Coast campus.

Highlights of the Fraser Coast graduation ceremony will include:

• Bachelor of Business student Kerri Hetherington will be presented with the University’s highest honour for a graduating student – the Chancellor’s Medal.

• Dr Vernon Harris, a 93-year-old zoologist from Hervey Bay who has devoted his life to studying microscopic marine invertebrates, will become an Honorary Senior Fellow of USC.

• A Doctor of Philosophy will be conferred on Lecturer in Accounting Ratna Paudyal, who grew up in a remote Nepalese village to illiterate parents. In 2016, Dr Paudyal was recognised for his outstanding contribution to student learning in the prestigious Australian Awards for University Teaching. 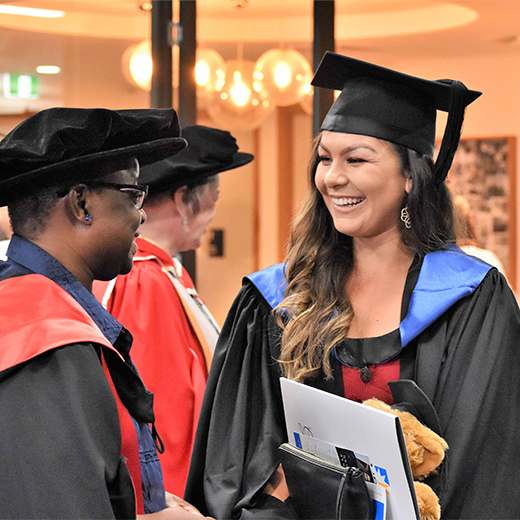