Cats across the Sunshine Coast are hitting the streets in high-tech cat harnesses, all in the name of environmental science.

University of the Sunshine Coast researcher Nicole Galea is kitting out household moggies with harnesses and accelerometers to track how they are behaving once they are outdoors, in a bid to boost wildlife protection efforts.

She says domestic cats have long been responsible for preying on native wildlife, and yet many of the Sunshine Coast’s estimated 38,600 domestic cats are left outside at night.

Nicole, who is studying a Bachelor of Ecology Honours supervised by Dr Christofer Clemente, said the devices could monitor whether a cat was walking, running, hunting or pouncing.

“We are studying biomechanics, which is the way the cat is moving, so that we can understand what they are getting up to at night long after we go to bed,” she said.

“Camera trapping only shows a snippet of what the cats are up to, and human observation can be very difficult, whereas the accelerometer is showing us activities and behaviours that can give us a better idea of how cats are truly impacting the bushland.”

Volunteer cat owners across the Coast are being asked to use the devices for eight consecutive nights with all data being recorded based on their cat’s unique movements.

“We know where the cats go, but we don’t know what they are doing and the impact they are having on bushland,” Nicole said.

“Biometric data will give us important information to help us manage them more effectively.”

The research will also assess the effectiveness of a cat “bib” designed to restrict a cat’s natural hunting movements and give prey a better chance of escaping.

Sunshine Coast Council local laws do not allow cats to roam at night, but Nicole’s project has received special dispensation for its potential to provide valuable data in the fight against domestic animal predation of wildlife.

The data will also feed into a national study called Using performance to predict the survival of threatened mammals.

She’s seeking 30 registered, microchipped and desexed cats to be involved in the study before it finishes at the end of the month. More information is available at n_g027@student.usc.edu.au

Nicole eventually wants to work in biosecurity and says an approach like this could eventually be tailored to understand and manage other invasive species. Her research has been supported by the Friends of Mary Cairncross Association. 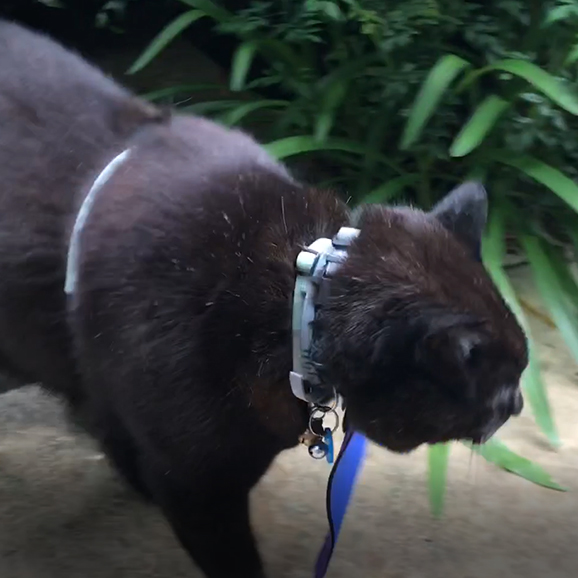 Ensuring our environments are safe and hygienic in the wake of the COVID-19 pandemic will be the topic of a free public webinar on Thursday 29 October from 6-7pm.

Mental health experts from USC will share some of their latest research on staying well during COVID-19 in a free online seminar next week.