USC Communications academic Gil Douglas showed he can both talk the talk and walk the walk when he competed in a hard-fought spoken word competition at the recent 2018 Horizon Festival on the Sunshine Coast.

Mr Douglas, who also tutors in History and Sociology, took on some more experienced performance poets and storytellers from across Australia and abroad to claim three awards at the Bunker Spoken Word Series final at Eumundi’s Imperial Hotel.

On his way to winning the storytelling section, claim the People’s Choice award, and finish second in the poetry section, he presented what he described as a “very character-based, left-field and kooky” poem called ‘Ode to Dyson’ about a vacuum cleaner.

Mr Douglas said his experience as a lecturer, plus strong support from his academic supervisors at USC, had boosted his public speaking skills and confidence over the years.

“It’s amazing how lecturing enhances your ability in front of an audience,” he said. “I’ve had two fantastic supervisors in Dr Marcus Bussey and Dr Greg Nash who’ve afforded me some great opportunities.”

In the final of the storytelling contest, he found himself competing against USC doctoral student Emily Larkin.

Ms Larkin drew on a story written for her thesis to present a futuristic tale aimed at taking the stigma out of depression. She finished second behind Mr Douglas.

Bunker Spoken Word Series organiser Dr Nycole Prowse congratulated both Mr Douglas and Ms Larkin on their achievements at the Horizon Festival, which is run annually by the Sunshine Coast Council. 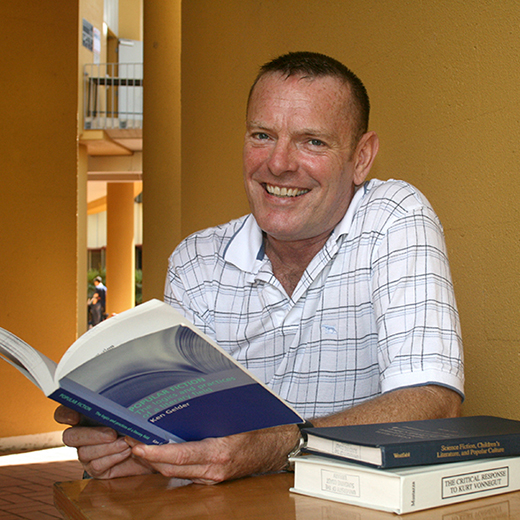