A USC researcher has found that nests offer little respite to birds wanting to escape the damaging effects of traffic and other human-generated noise.

USC Lecturer in Animal Ecology Dr Dominique Potvin recently shared her findings with bird experts from all over the world at the International Ornithological Congress in Vancouver, Canada.

“Global research shows that birds are susceptible to negative impacts of urban noise at all life stages however investigations into whether birds can – and do – change nesting behaviours to cope with urban noise have only just begun,” Dr Potvin said.

“This study is the first to look at whether nests might play a role in protecting birds from the racket outside.”

In a previous study, Dr Potvin found that egg and nestling survival, and growth and development – including brain development – suffered when nests were subjected to traffic and other noise.

“Birds modify certain nesting behaviours based on environmental factors such as predator type and it makes sense that they may also make decisions on nest orientation, materials or structure based on their acoustic environment,” she said.

Expecting to find that urban noise would generally be lower inside nests, Dr Potvin conducted tests on 250 museum nest specimens in a comparative study into how the size, shape and materials affected acoustics.

“Surprisingly we found that most nests were generally ineffective at dampening environmental noise and that shape appeared to make little difference. The exception was mud, which had levels up to six decibels lower than other nest types.”

While the smart move is for birds to build their homes from mud, the study did not suggest that mud nests were an adaptive response by birds to cope with noisy neighbours.

“These nests may give urban birds an advantage, but it appears they are not a prerequisite to living in the city,” Dr Potvin said.

“Of the species that use mud nests such as swallows, martins, magpie-larks, apostlebirds and white-winged choughs, we have both urban adaptors and urban avoiders, suggesting that mud use is not likely specifically linked to noise avoidance.”

The study was published in the recent edition of EMU Austral Ornitholgy, an online journal for ornithological research in the Southern Hemisphere and adjacent tropics.

Dr Potvin hoped the findings would be a starting point for more thorough investigations into the effects of noise on birds and how nesting behaviours could contribute to a resilience against harmful environmental conditions. 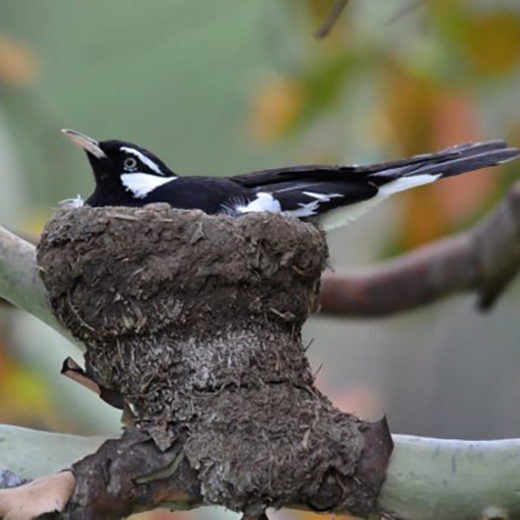