Research into lung disease and tree biosecurity has been boosted by two 2018 Advance Queensland Industry Research Fellowships awarded to academics at the University of the Sunshine Coast.

The fellowships, valued at $300,000 each over three years, were awarded to Dr Erin Price for research into next-generation diagnostics of chronic lung disease infections and Dr Helen Nahrung for research into biological invasions in forestry and how to mitigate them.

Dr Price said the funding would help her team find better diagnostics and treatments for lung infections in chronic obstructive pulmonary disease (COPD), which is the fifth leading cause of death in Queensland and Australia.

“COPD is a more common cause of death than diabetes and Alzheimer’s combined, is the second-most common cause of hospitalisations and yet, surprisingly, it is still poorly understood,” she said.

Sufferers have difficulty breathing, are often smokers or ex-smokers who have lung cancer, and there is no known cure.

“This project is really exciting because we will be using next-generation sequencing to characterise infections in COPD airways in unprecedented detail,” Dr Price said.

“By identifying the microorganisms present in the COPD lung, it might be possible to detect lung cancer earlier based on a patient’s microbial ‘signature’, and it will help us better understand what microorganisms are causing people to have acute periods of the disease for which they often require hospitalisation,” Dr Price said.

This research is being conducted in partnership with respiratory physicians from the Sunshine Coast and Metro North Hospital Health Services.

“There are already several established exotic pests and pathogens in Australia that impact significantly on native and plantation forests including myrtle rust and sirex woodwasp,” Dr Nahrung said.

“We want to find the best ways to manage the exotic pests that are already here and try to prevent the establishment of new pests to boost the survival of trees, boost productivity and protect the export industry on which Queensland has a great economic reliance,” she said.

Existing measures also needed to be tailored to Queensland’s specific conditions and pine species, she said.

The research is conducted in partnership with the Department of Agriculture and Fisheries, Plant Health Australia, HQ Plantations and National Sirex Coordination Committee.

USC Deputy Vice-Chancellor (Research and Innovation) Professor Roland De Marco said the fellowships were a testament to the importance and quality of USC’s focused research in forestry and biomedical science.

“Both of these projects are expected to make an enormous impact on the lives and livelihoods of Queenslanders,” Professor De Marco said.

“This is another reminder that regional researchers play an important role in building the State’s knowledge economy.” 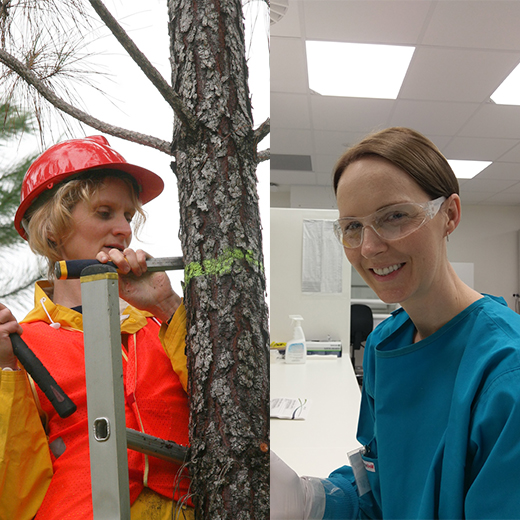