An aspiring biomedical scientist and OP1 student from Maryborough has been awarded a prestigious University of the Sunshine Coast scholarship.

The 2017 Riverside Christian College dux plans to use the fast-tracked degree as the pathway to medicine or post-graduate research in either biotechnology or biomedical science.

“I’ve always had a passion for science, and this scholarship will allow me to study to the best of my ability, without any financial pressure,” the 17-year-old said.

As a USC Science Deans Scholar student, Mikaela will complete a three-year Bachelor of Science degree in two years through a combination of increased load in semesters and studying during the summer and winter breaks.

She will then complete Science Honours in one-year through the individually tailored program designed for high-achieving school leavers.

“This generous scholarship will be a major help with my studies,” she said. “With the extra workload required, I would have found it hard to find the time for a part-time job to help towards the cost of university.”

Mikaela is one of four first-year students selected to receive the Thompson Excellence scholarship, which is awarded in recognition of impressive academic achievements during senior high school.

As well as being senior dux, Mikaela received several science-based awards at school, include the Scientist of the Year Award in last year’s Fraser Coast Science Research Awards, hosted by USC.

The list also includes the school’s Science Faculty Award, the Zonta Club Award for high achievement in STEM subjects as a female student and a high distinction in a university headstart subject in human anatomy and physiology.

Unsure of what field of science to pursue, she said she was drawn to USC’s Dean Scholar’s Science program by the flexibility it offered to explore several traditional and emerging disciplines.

“At the moment, I have chosen Biomedical Science as a major and Biotechnology as a minor,” she said. “When I graduate, I plan to study medicine or continue research into the field of science that interests me most during my degree.” 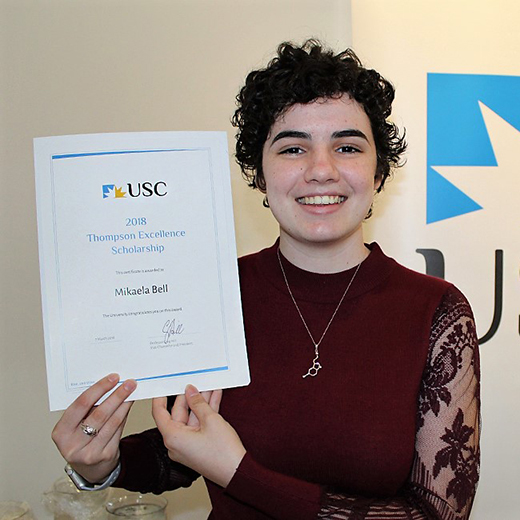