Tight deadlines, celebrity interviews and breaking news are all part of a day’s work for three new USC Journalism graduates who have gained prime positions with the Seven Network.

Melissa Halsey is a cadet journalist with Seven’s Sunshine Coast bureau, Amy McCann reports on news and events in the Wide Bay region, and Gemma Donahoe is a social media producer working across studios in Brisbane and Maroochydore.

The three women, who all grew up on the Sunshine Coast, gained jobs in the highly-competitive television news industry late last year while in their final semester of USC’s three-year Bachelor of Journalism.

“It is a high-pressure job but I love it because I work best under short deadlines” said Amy, 22, who is based at Channel 7’s Bundaberg newsroom. “Every day brings something new so it is never dull.

“I love the creative side to journalism— taking a story, choosing an angle and turning that into something engaging for the public.”

Amy attributed her job success to industry placements in the news media organised by USC, and being mentored by professional journalists throughout the degree.

After initially starting journalism at a larger Brisbane university, Amy transferred to USC where she gained practical experience as a news assistant and intern at WIN News, and as a digital content uploader with Australian Regional Media.

The former Sippy Downs resident, who graduated from Siena Catholic College in 2012 with an OP3, also completed a one-month internship with CNN Indonesia in Jakarta at the start of last year.

“USC’s degree was incredibly practical with nearly every subject helping you gain real-world experience and preparing you for the day-to-day demands of TV news reporting,” she said.

“I would not have gained employment straight out of university without the mentors I had and the contacts I made at USC.” 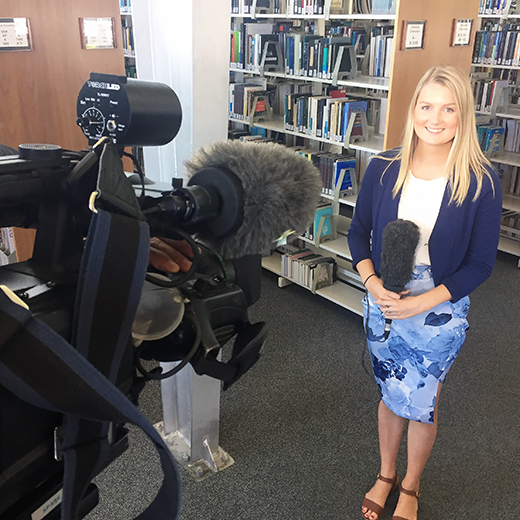