The accolades keeping rolling in for Gympie’s Young Citizen of the Year Quinn Edwards who has been awarded one of USC’s most prestigious scholarships for first-year students.

The 2017 James Nash State High School captain and OP1 student who has started a double degree in Law and Creative Writing at USC was one of two students selected to receive the $20,000 Renouf Family Scholarship.

The annual scholarship was established by Sir Clem Renouf to provide outstanding new USC students with financial support during their undergraduate studies.

“My intention is to become a novelist, playwright or a humanitarian law advocate and this generous scholarship will provide incredible assistance in allowing me to complete the dual degree and chase these lifelong goals,” Quinn said.

“This support will take considerable pressure off me in the future, allowing me to pay off the majority of my HECS debt.”

Selection for the scholarship is based on academic and leadership achievements at high school. As well receiving an OP1, the 18-year-old was the senior dux of his school and received its Caltex All-Rounder Award, Citizenship Award and two subject prizes.

He wrote and starred in the school’s musical production, represented Wide Bay in squash, won Gympie’s 2017 Quota Youth of the Year competition and was named the city’s Young Citizen of the Year in the recent Australia Day honours.

Quinn said he was enjoying the new experiences that the University offered during his first few weeks at USC’s Sunshine Coast campus.

“I’ve found that USC has a really relaxed, friendly atmosphere and I am thoroughly enjoying both my Creative Writing and Law subjects,” he said.

The keen sportsman, who plays competitive squash, volleyball and cricket, said he had already “had a tonne of fun” playing volleyball in USC’s Sports Stadium.

“I look forward to participating in more activities as I settle fully into university life.” 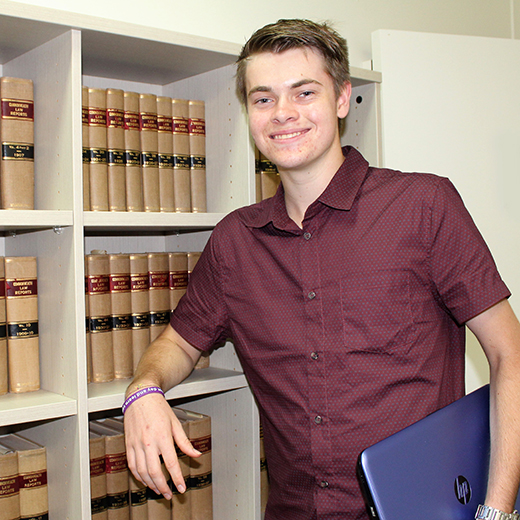