Influence of comic strips to feature in exhibition bound for USC - University of the Sunshine Coast, Queensland, Australia

Influence of comic strips to feature in exhibition bound for USC

The opening of USC Art Gallery’s next exhibition on Saturday 24 March looks set to be a very colourful affair, with guests encouraged to dress as their favourite comic strip characters.

Two of the artists, Jonathan McBurnie and Charles Street, will present a floor talk at 1pm before the official opening at 2pm by Justin Bishop, the Director of KickArts Contemporary Arts in Cairns.

USC Art Gallery Manager Megan Williams said the exhibition, which will remain on show at the gallery until 12 May, worked on several levels.

“On the surface, the works in The Strip Show are fun, colourful and full of recognisable comic characters such Batman, Astro Boy and Monkey Magic,” she said. “However, the artists utilise the pop sensibility and subversive possibility of the comic strip to unveil truths about humanity.

“For example, Brian Robinson’s elaborate lino prints reflect the culture and tropical marine environment of Waiben (Thursday Island) in the Torres Strait where he grew up, but intertwined in the works are refrences to classical Greek, Roman and Renaissance art and representations of super heroes and villians, such as Spiderman and Darth Vader.

“In doing this, Robinson reveals how Torres Strait Islander people navigate their culture as well as the influences of Western culture.

“Destruction and devastation are prevalent in Japanese Manga and, in his 11-panel painting Tsunami, the artist documents the devastation of the 2011 earthquake off the coast of Japan that triggered tsunamis and caused the Fukushima nuclear disaster.

The USC Art Gallery is located at USC’s Sunshine Coast Campus on Sippy Downs Drive, Sippy Downs. It is open free to the public from 10am to 4pm Monday to Saturday and closed Sundays and public holidays. 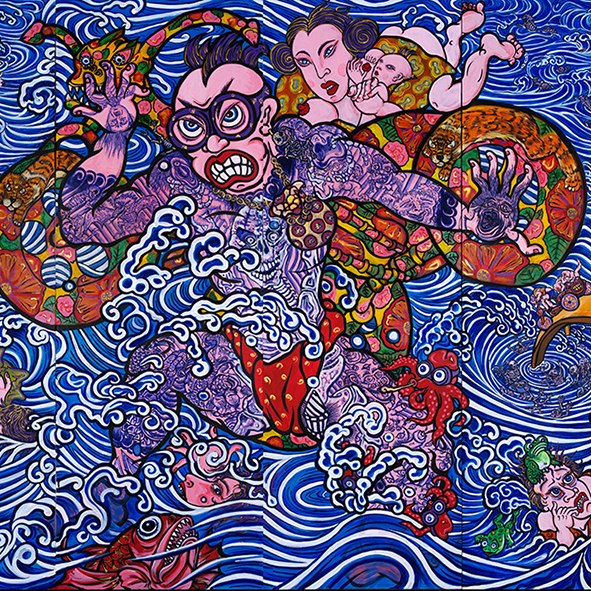 An exhibition exploring the history and site of the 1838 Myall Creek massacre through the work of some of Australia’s leading Indigenous artists is expected to challenge visitors to take a new look at history.