A duo of ocean delicacies - sea grapes and sea cucumbers – are the focus of two international research projects at the University of the Sunshine Coast.

Genecology researcher Chieu Hoang Dinh and student Hayley Butcher have each received up to $4,000 from the Crawford Fund to study their sea-dwelling subjects through the Australian Centre for International Agricultural Research (ACIAR).

Chieu, of Mountain Creek, who is studying the genetic diversity of sea cucumbers in Australia and Vietnam, says his research seeks to help support conservation and hatchery production in both countries.

“If we can identify the key genes for spawning and for growth, we can help support depleted sea cucumber stocks in the wild and help hatcheries boost their stocks,” he said.

Sea cucumbers face growing demand in Australia and internationally as a nutritious meal base, and as the basis for medicinal products.

Chieu will use the funds to survey cucumbers in three regions in Vietnam, as well as on the Sunshine Coast and in Darwin. His research is supervised by Associate Professors Scott Cummins, Professor Wayne Knibb, Professor Abigail Elizur and Dr Nguyen Hong Nguyen.

Hayley, of Kawana Island, is a third-year Nutrition and Dietetics Honours student studying the sea grapes produced by caulerpa seaweed, in particular how they are consumed by people in Samoa.

While analysis shows the grapes contain beneficial elements and minerals, Hayley is investigating how many people eat the grapes, how much they consume, how they consume them, the possible health benefits and the potential for a larger market.

“We have found one particular species that is readily domesticated that we know is already sold in Samoa that could be consumed elsewhere. We know that the sea grapes are 70 per cent minerals so their potential health benefits are worth exploring,” she said.

Hayley is supervised by Professor Nicholas Paul, who has been working in the Pacific Islands for about four years, particularly in sustainable aquaculture.

USC PhD student Samantha Nowland, has also received funding from the Crawford Fund for a study into developing pearl industry-based livelihoods in the western Pacific, in a project funded by ACIAR and run USC’s Tropical Aquaculture Research team.

Samantha is based at the Darwin Aquaculture Centre and says she hopes her findings will assist similar developments in the Northern Territory. 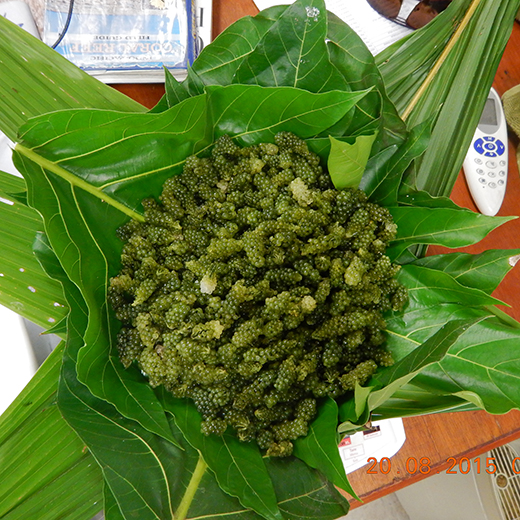