A Psychology PhD student who aims to reduce road fatalities by creating a safer environment for learner drivers has won a challenging research contest at USC for the second year in a row.

In her presentation ‘Road safety is in the eye of the beholder’, Rachael took the audience back to when she was an inexperienced learner driver who, at age 16, nearly struck a pedestrian.

She then compared the narrow visual field she had back then to the wider scope she now has as a more seasoned driver.

“I’m investigating where people look when they drive and how I can get the most accurate representation of people’s driving habits,” she said.

“I am also examining learner drivers and how they learn to divert or direct their attention to how they’re driving, and how that changes over time.”

Rachael’s prize of a $1,000 travel scholarship will see her compete in the Asia-Pacific Three Minute Thesis competition on 27 September in Brisbane.

Runner-up in the Three Minute Thesis event, held as part of USC’s annual Research Showcase, was Journalism PhD student Katri Uibu who is researching the representation of domestic violence in Australian online news.

The audience also was treated to 17 presentations by USC academics competing in a Minute to Win It competition, in which they each had 60 seconds to describe their research project in a fun and informative way.

Lecturer in Physiology Dr Mia Schaumberg won this competition for her presentation ‘Exercise – it’s a no brainer!’, which described her work in determining the best type of exercise for brain health for those who are ageing. 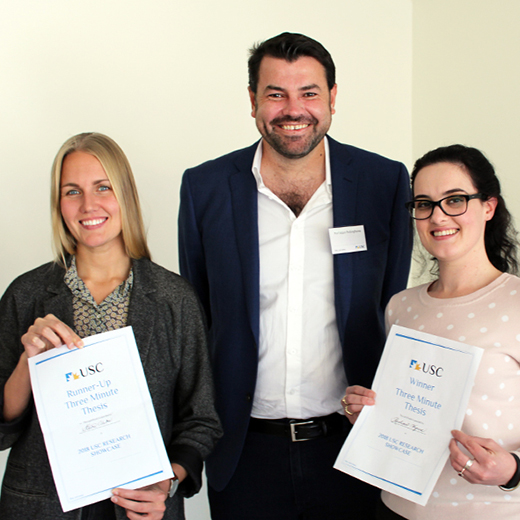