After a decade-long project to unlock the mysterious life of Australia’s manta rays, researchers say there is still much to learn about these enigmatic sea creatures.

“In 10 years we’ve gone from having little scientific knowledge about Australia’s manta rays to being made aware of a second species, gathering extensive insights into their ecology and biology, and building a national database of over 2000 individuals,” Dr Townsend said.

“Yet we still have many unanswered questions, such as how many there are in Australia, how long they live for and how far they travel.”

Project Manta started on the east coast of Australia at two main study sites – Lady Elliot Island and North Stradbroke Island – before expanding to a national partnership between USC, the University of Queensland, Murdoch University and Deakin University and industry partners.

There are currently 20 research projects underway, with acoustic and satellite tagging used to measure migration patterns and genetic sampling determining population size and connectivity to locations in Australia and internationally.

Tools such as plankton tows and satellite oceanography are helping investigate the feeding and movement behaviours of the graceful mantas, the largest rays in the world.

Dr Townsend said the biggest success of the past decade said was the trailblazing role of citizen science in building the project’s national database.

“The dot and spot patterns of the manta’s underbelly are like a fingerprint, allowing researchers to use photographs of these markings to identify individual rays,” she said.

“About two-thirds of the database has come from recreational divers, who are the eyes of this project around Australia.

“Thanks to citizen scientists, we recently logged the longest recorded movement of two male mantas, first photographed off Brisbane and again 1000km away off the Townsville coast.”

Dive tourism operators are also long-term partners, including Lady Elliot Island Resort, a courting, breeding and feeding hotspot which is home to up to over 400 resident reef mantas.

“Since 2008, the resort has provided access to boats and dive locations where mantas frequent, and daily logbook entries from the dive staff on numbers have provided invaluable information for our research,” Dr Townsend said.

Project Manta’s pin-up boy is Taurus – a black manta who was among the large group of males recorded courting females on the latest field study on Lady Elliot Island.

“Taurus is the oldest known animal in our database and was first photographed at the island in 1983, making him over 40-years-old and giving an indication of the manta’s life span.”

Data gathered by the project contributed to both species – the smaller reef manta and the giant oceanic manta – being added to the International Union for Conservation of Nature’s Red List of Threatened Species in 2011 and gaining protection under Australian laws.

Dr Townsend will discuss the impact of marine debris on sea life, including mantra rays and turtles, at a free public talk, ‘Plastic Ocean’, on 10 August at USC’s Fraser Coast campus. Registration is required. 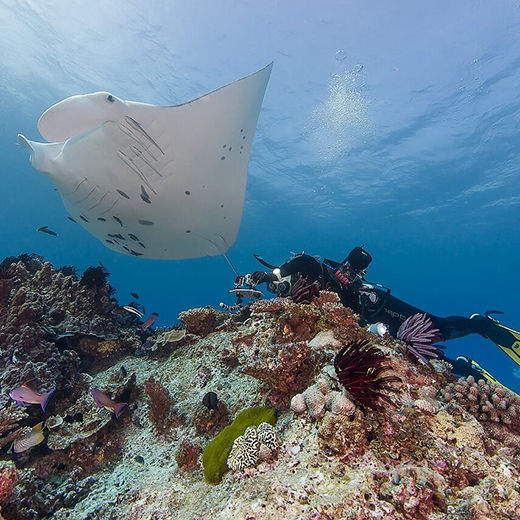