Everyone’s heard of the Titanic, but the heroic tale of the boat that risked everything to rescue survivors has been little known, until now.

University of the Sunshine Coast academic and recent doctoral graduate Dr Jay Ludowyke has published a book on the transatlantic steamship Carpathia, to be launched on July 17 at the USC Art Gallery from 5.30pm, marking the 100th anniversary of when the Carpathia sank in World War I.

The evening will feature live music, wine, canapes, art, literature and an introduction by Bruce Atkinson from ABC Sunshine Coast. Media is invited to attend and RSVP is essential.

“The Carpathia saved an estimated 712 people who were aboard the sinking Titanic,” said Dr Ludowyke of Buderim, who wrote the book for her Doctor of Creative Arts thesis at USC.

“The captain and his crew were risking the same fate as Titanic, weaving through icebergs to reach the sinking ship.”

Dr Ludowyke said while her thesis only needed to be of publishable quality for her degree, attracting the interest of publisher Hachette was “the best possible outcome”.

“I met the editor at the Emerging Writers Festival in Sydney and she was very interested in the project. Then days after I sent her the manuscript, she said she loved it,” Dr Ludowyke said.

The Carpathia has previously only attracted short mentions in Titanic tales, overshadowed by the most well-known maritime tragedy in history.

In fact, Dr Ludowyke only learned of the vessel while watching an episode of Antiques Roadshow that featured a medal awarded to a Carpathia crew member.

“I realised this was a heroic angle to a tragic story,” Dr Ludowyke said.

“I was about to enter my doctoral program and I had a few ideas lined up but this one intrigued me and, because of the Titanic, had commercial potential too.”

Over three years she researched the topic extensively and visited archives in London, Newcastle and Liverpool, as well as Titanic Belfast in Ireland, on a trip funded by USC.

The result is a narrative non-fiction paperback that covers Carpathia’s beginnings as a passenger ship operating between New York and the Mediterranean, its involvement in the rescue of Titanic survivors, its use in World War I when it was sunk by a torpedo, and the modern expeditions to find and dive the sunken wreck.

“I came to this with no maritime experience. I just found a story that I wanted to write and it made for a steep learning curve. I had a research book in one hand and a dictionary in the other, looking up nautical terminology. It was like trying to learn a new language,” she said.

Dr Ludowyke is currently writing her second book and teaching creative writing at USC. She was born in Tasmania and moved to the Sunshine Coast when she was 12.

Attendance at the centenary book launch is free, but places are limited. RSVP is essential via www.carpathia.eventbrite.com.au

Carpathia: The extraordinary story of the ship that rescued the survivors of the Titanic will be in bookshops from 10 July, 2018. Copies can be pre-ordered at Hachette Australia’s website: www.hachette.com.au/book/carpathia-wto 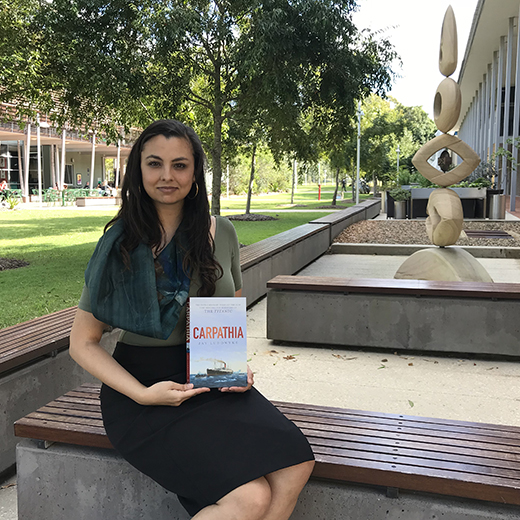 USC graduates achieving great things in their chosen field or community are being sought for the spotlight at the 2020 Outstanding Alumni Awards.

Gaining a Master of Business Administration (MBA) at USC while seeking admission to practise law in Queensland could prove a game-changer for Werner Pretorius of Buderim.