A USC academic who participated in a ground-breaking study of child statelessness in Indonesia over the past four years says the problem is much bigger than she had first thought.

Senior Lecturer in Human Geography Dr Harriot Beazley, who has 25 years’ experience working in Indonesia, was invited to work on the project by academics Associate Professor Leslie Butt and Professor Jessica Ball from the Centre for Asia-Pacific Initiatives (CAPI) at the University of Victoria, Canada.

The research investigated why some parents fail to register children at birth, and was funded by a grant awarded in 2014 from Canada’s Social Sciences and Humanities Research Council.

“It was a much bigger problem than we ever expected,” Dr Beazley said.

“Non-birth-registration can have a devastating impact on people because it’s much harder to attend school, get a job, rent a house, or legally marry.

“This results in people getting ‘culturally married’, without it being recognised by law, leading to generational statelessness because those people are unable to register the birth of their own children if they are not legally married. The research also found numerous other barriers that prevent poor people in rural areas from registering their children at birth.

“Lack of birth registration is a major contributor to poverty, child poverty, and homelessness.”

The researchers, who spent two months in four East Lombok communities, found the problem was exacerbated by parents who travel overseas for work, leaving behind their undocumented children to be raised by the community, sometimes for years at a time.

Dr Beazley said it was the first time a study on child statelessness among transnational migrant communities been conducted in the Asia-Pacific nation.

USC funded a second trip to Indonesia for the researchers to present the findings to key stakeholders, including the United Nations Children Fund, Indonesian government bodies, and local research organisations.

“Without that funding from USC we wouldn’t have been able to present our findings to government agencies in Indonesia who are able to make policy changes,” Dr Beazley said. 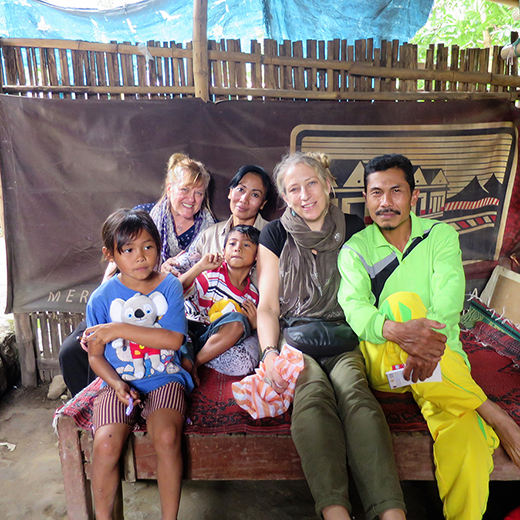