SC Honours graduate Lauren Pratt has returned to Bundaberg to work as an occupational therapist, inspired by timely advice from another USC graduate from her home city.

Lauren graduated from USC with a Bachelor of Occupational Therapy (Honours) in October and soon after gained a position with the Friendly Society Private Hospital in Bundaberg.

The former Kepnock State High School senior said a conversation with Rachael Anderson, a Shalom College graduate who she contacted out of the blue through Facebook, had convinced her to become an occupational therapist.

“I initially moved to Brisbane to begin a nursing degree after leaving school in 2012, but after my first year I knew nursing was not my thing and returned home,” Lauren, 22, said.

“I still wanted to work in the health field, so when I heard from mutual friends that Rachael was studying Occupational Therapy at USC, I got in touch to discuss the program. “

Rachael raved about OT and USC’s degree, and after hearing how much she was loving it, I was persuaded to enrol.

“We have gone from never meeting while growing up in Bundaberg to taking almost identical study and career paths, becoming good friends, and now being professional colleagues as well.”

After completing her USC degree in 2015, Rachael, 23, also returned to the Wide Bay region to work as an occupational therapist with the Department of Education and Training in state schools in Maryborough.

Both Rachael and Lauren were USC Student Ambassadors during their studies, sharing their university experiences and insights with high school students and their parents.

Rachael said she had no hesitation in recommending to Lauren USC’s Occupational Therapy degree and the lifestyle advantages of studying on the Sunshine Coast. “My degree was a very positive experience for me.

I loved all of the support from the lecturers and the many opportunities for practical experience,” Rachael said.

Lauren also found the program’s emphasis on early practical experience was a major advantage. “I completed 1,000 hours of clinical placement, including a final prac at the Bundaberg Base Hospital.

The placements were an excellent opportunity to further my knowledge base and to get real life experience as an occupational therapist.” 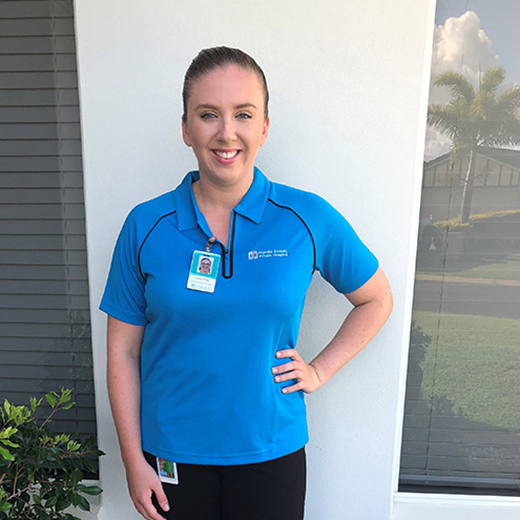