Teaching is a family affair for USC graduate - University of the Sunshine Coast, Queensland, Australia

Teaching is a family affair for USC graduate

James Nash State High School at Gympie has a father and son team on staff with new USC Education graduate Gareth Francis returning to his former school this week as a teacher.

He has started working alongside his dad Shaun, a long-time English and music teacher at the school, to instruct students from Years 8 to 11 in business and IT.

“Teaching is definitely in the blood,” said Gareth, whose mother and brother are also educators.

He was among the first cohort of Business students from USC Gympie to graduate in April 2017, when he received a commendation for academic excellence and delivered the graduate address on behalf of fellow students.

After leaving school 18 years ago, Gareth worked as a postal worker and a computer technician, among other jobs, before deciding to begin a university degree.

“I moved from Brisbane back to Gympie with my wife and children in 2013 specifically to study at USC’s local campus,” he said.

A rural placement at Capella State High School in central Queensland was a highlight of his Graduate Diploma of Education.

“A rural or remote placement is a great experience which I would recommend to anyone who is studying Education,” he said.

“Being able to experience teaching in such a different setting was an eye-opener. I loved the small class sizes which really helped you to get to know the students.”

Gareth said he was looking forward to experiencing his old school from the other side. “I feel lucky that I will be able to help provide students with the same high-quality education that I received at James Nash,” he said.

Being on staff with his father was a bonus. “He's a great teacher and although we will be in different faculties, I know I will benefit from having him there during my early teaching career.”

Applications are open to study at USC, starting Semester 1 on 26 February 2018. Details on how to apply. 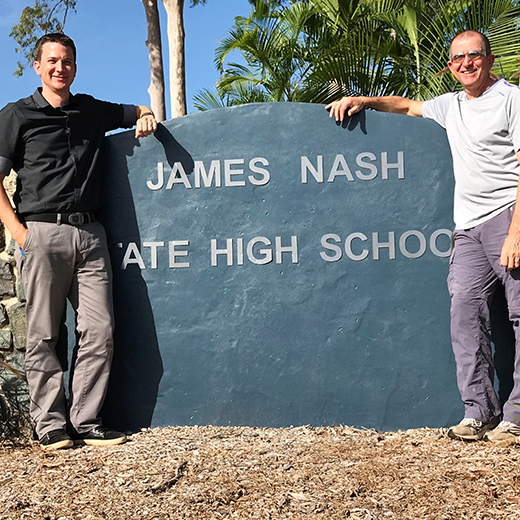