Researcher sizes up state of play in school rugby - University of the Sunshine Coast, Queensland, Australia

Researcher sizes up state of play in school rugby

Rugby union’s governing bodies need to tackle a perception the sport is mainly a game for large private schools in metropolitan areas if they want to revive its flagging popularity, according to a USC Sports academic.

Lecturer in Sports Studies at USC’s Fraser Coast campus Dave Robinson was recently invited by Rugby Australia to present his PhD research into coaching and promoting the code in regional areas at a high-level focus group discussion on the state of play for school rugby.

A recent Roy Morgan survey found a 63 percent drop in nationwide participation of rugby union since 2001, with the game now ranked as Australia’s 26th most popular sport, behind table tennis and ballroom dancing.

Mr Robinson previously presented his findings at the ‘World in Union’ international rugby conference in New Zealand in June. His research identified several factors impacting on the development and popularity of school rugby union.

“Better promotion and support from Queensland Rugby Union and Rugby Australia at a regional school level is a way of encouraging greater participation,” he said.

Mr Robinson said the research highlighted the need for more effective communication and connection between the code’s governing bodies and regional school coaches, and greater mutual understanding of the difficulties each party faced in promoting the game.

“There have been encouraging signs from Rugby Australia's focus on junior participation, however, this momentum needs to carry on into secondary schools,” he said.

"We have enthusiastic and dedicated coaches in these areas doing great work. Rugby's governing bodies just need to tap into them more effectively."

He recommended expanding the number of rugby events in the regions, improving coach education and development opportunities in regional centres, and providing more accessible pathways for players to higher representative honours.

He said regionally-based players would also benefit from regular coaching clinics by visiting elite representatives and senior coaches from state and national teams.

“The focus group was a wonderful opportunity to discuss needs and initiatives with Rugby Australia’s policy-makers as we seek to align our resources towards a common direction.” 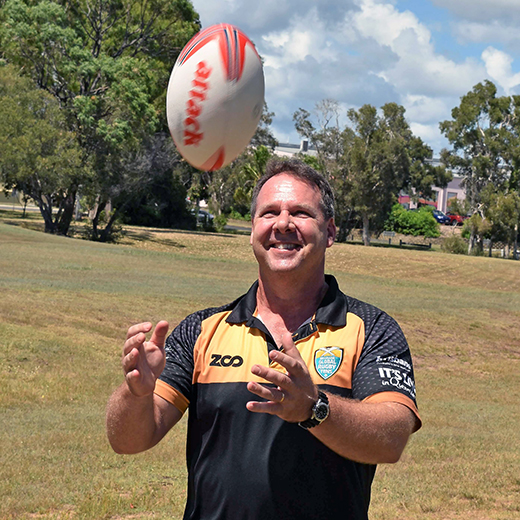 A decision to explore Australia has led to a brand-new life and career focus for former Germany bookkeeper Beke Koehn, who graduated recently from USC.

As a former police officer and army soldier, USC Social Work student Michelle Minchin has helped people during some of their lowest times – including when they’ve been impacted by domestic violence or suicide