When USC student Klaus Jungbluth competes in cross-country skiing at the Winter Olympics in Pyeongchang, South Korea, he will become the first athlete ever to represent his home country of Ecuador at the games.

In a story that could be likened to the 1990s comedy Cool Runnings, Jungbluth, 38, was an Olympic weightlifter but was forced to find a new sport after suffering a knee injury.

In 2012, the Ecuadorian – from the humid city of Guayaquil, which is just two degrees south of the equator – said he discovered he enjoyed using roller skis to train for cross-country skiing because it had low impact on his knees.

By July last year, in the middle of the 2018 Winter Olympic qualification period, Jungbluth arrived on the Sunshine Coast to start his PhD in Exercise Physiology at USC.

“USC has been very supportive through its High Performance Student Athlete program since my qualification process,” Jungbluth said.

“I’ve mostly been my own trainer since I started in 2012, but the PhD program has given me more knowledge and experience with the physiological and technical part of the sport.”

Jungbluth, who lives in Mountain Creek, said Buderim’s hilly landscape provided a perfect training ground for him in between his study at the nearby university campus.

“I’ve been using my roller skis a lot and the hills have been good for running fitness,” he said. “It has not been hard to train on the Sunshine Coast because I have trained before in places without snow and with no winter sports tradition.”

The USC student said it was an honour to be a flag bearer at the Winter Olympics, where he will be the sole athlete representing his country.

“It is like you have the whole country in your hands when you carry the flag,” Jungbluth said. “It is a great feeling.

"I feel very rewarded because this qualification has been really hard, with many hours away from home for training and competitions, but finally the hard work has paid off.”

Jungbluth – a father of four – said his main goal was to beat other athletes from Latin America who were competing at the Winter Olympics.

“I am aware that I will be competing against people that have been doing this for their whole life,” Jungbluth said.

“But for me the biggest goal has been already achieved, which is getting a spot at the Olympics.”

Jungbluth has arrived in South Korea’s Pyeongchang to spend the next few days preparing for when the Winter Olympics start on Friday 9 February. 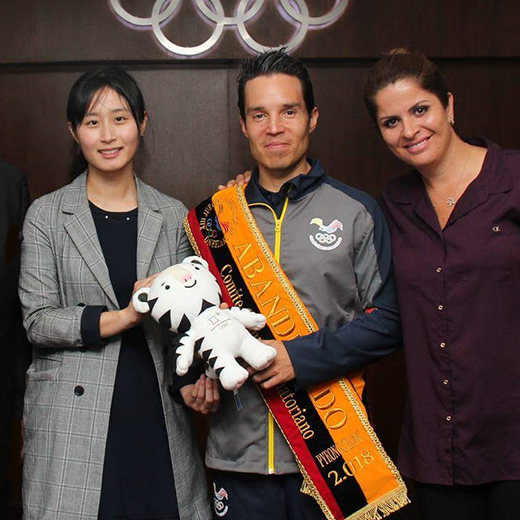