Seven outstanding USC student athletes have shared in more than $50,000 in scholarships to help them achieve their academic and sporting goals.

This award went to Australian wheelchair basketballer Hannah Dodd who is studying a Bachelor of Health Science, majoring in Prosthetics and Orthotics.

Ms Dodd was competing at the 2018 Japan Cup in Asaka last week, so USC researcher and Paralympic wheelchair basketballer Bridie Kean accepted it on her behalf.

Two USC Sport Scholarships worth $6,000 each went to Primary Education student Jordan Mercer for her achievements in surf lifesaving and Occupational Therapy student Annabella Sorby for her efforts in representative netball.

Zahn, who graduated from St John’s College in Nambour with an OP5, said he was thrilled to receive the scholarship in his first year at university.

“It can get pretty expensive travelling to all the water polo events, so it’s just nice knowing that I have that extra money for those upcoming tournaments,” Zahn said.

“Through research we’ve shown that student athletes can often perform in their sport for longer because they’re not worried about life after a sporting career,” Professor Burkett said.

“Generally, student athletes are also well organised and have pretty good time management, so they’re good at setting goals. But the internal support from USC helps a lot too.” 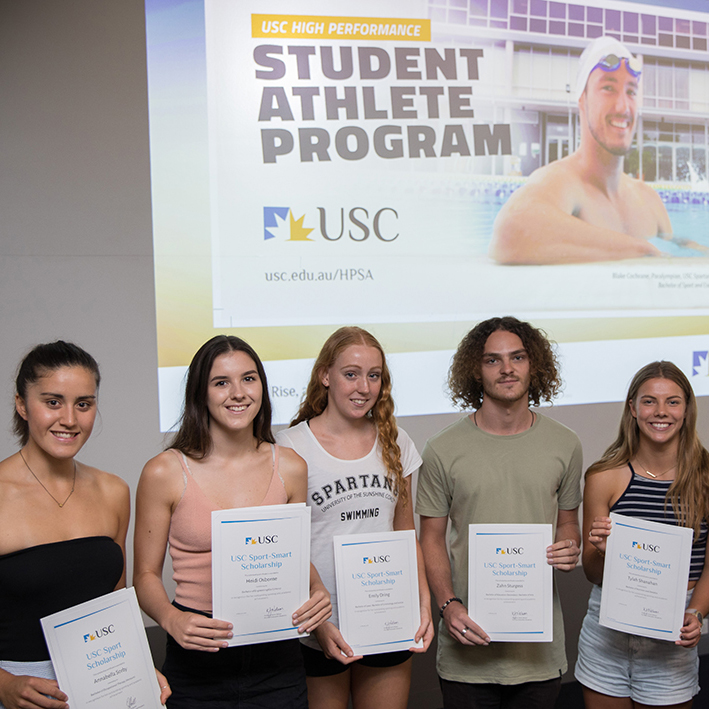