USC has continued to forge ahead in 2018 - University of the Sunshine Coast, Queensland, Australia

The University of the Sunshine Coast has continued to forge ahead in 2018, celebrating a string of achievements and standing out as one of Australia’s fastest-growing universities.

USC racked up numerous milestones this year, including graduating its 20,000th student, welcoming aspiring doctors through a new Bachelor of Medical Science degree, and breaking ground on its new campus at Moreton Bay.

It celebrated significant successes in research, learning and teaching, and high-performance sport, continued to grow in terms of student numbers, and has further established its reputation nationally and internationally.

The University is also well on its way to becoming carbon neutral by 2025, with the recent installation of 6,000 solar panels across its rooftops being celebrated with a Solar Nights light trail across its main campus during December.

USC Vice-Chancellor Professor Greg Hill said the University deserved to be proud of its achievements throughout 2018.

“We have maintained continued momentum, despite significant challenges facing the tertiary education sector,” he said. “Our relationships with our communities, especially from Fraser Coast to north Brisbane, have been crucial to our success.”

USC began 2018 by officially arriving in the Moreton Bay region, moving into a university campus previously run by QUT at Caboolture in January. Hundreds of students enrolled in degrees raging from Business and Education to Nursing Science and Midwifery.

Further north, USC Fraser Coast at Hervey Bay enrolled its third year of students since USQ handed over the campus to USC in 2016.

This rapid expansion at both Caboolture and Fraser Coast, however, went unfunded due to a Federal funding freeze imposed in December 2017. This was rectified in November this year when Federal Education Minister Dan Tehan announced a special package for regional universities that will put USC on a more equal footing with other universities in 2019.

Work officially began mid-year at USC’s newest campus at Petrie, to be called USC Moreton Bay. The campus will open in time for Semester 1, 2020 and eventually match the Sunshine Coast campus in size.

Work also began in November on a major expansion of USC Stadium, funded by the Queensland Government, that will increase the stadium’s seating capacity by almost 50 percent to almost 3,000.

Professor of Pathophysiology Robert Harvey recently won USC’s first National Health and Medical Research Council grant for his research into epilepsy. The grant of almost $600,000 will go towards investigating new treatments for severe seizures that affect children. Professor Harvey will lead a team from USC and the University of Queensland’s Institute for Molecular Bioscience.

Other major grant recipients this year were Professor of Sustainability Tim Smith, awarded an Australian Research Council Future Fellowship of $996,000 for his research into coastal governance, and Dr Martina Jeloncik, who earned an ARC Discovery Early Career Researcher Award grant of almost $380,000 to consider the full extent of chlamydial infections across birds, domesticated animals and humans.

In November, two Advance Queensland Industry Research Fellowships valued at $300,000 each were awarded respectively to Dr Erin Price to work on next-generation diagnostics for chronic lung disease infection and Dr Helen Nahrung to conduct research on biological invasions in forestry.

Numerous research projects were awarded to USC academics this year in fields ranging from road safety and forestry to health, mental health and molecular genetics. The most recent of these was a $2.7 million Australian Centre for International Agricultural Research project into aquaculture and the processing of a sea cucumber in South East Asia, to be led by Professor Paul Southgate.

Plenty of research work began this year at the Sunshine Coast Mind and Neuroscience Thompson Institute, which was officially opened in May. In August, researchers at the institute announced the launch of a landmark project, a long-term study of the adolescent brain.

The University launched Sunshine Coast’s newest pathway to becoming a doctor this year, welcoming 20 high-achieving school-leavers from across Australia to USC’s Bachelor of Medical Science. The degree offers direct entry into Griffith University’s Doctor of Medicine at the new Sunshine Coast University Hospital.

In April, USC celebrated its 20,000th graduate as well as the Sunshine Coast’s biggest graduation season with 11 ceremonies across three days. Renee Barber of Caloundra was acknowledged as the 20,000th graduate when she crossed the stage to receive her Bachelor of Social Work. USC also staged its first graduation at its Fraser Coast campus in October after expanding to that campus in 2016.

To tackle a global shortage of cyber security professionals, USC this year announced that it will launch a suite of study programs to fast-track graduates into the industry. The courses were developed by a team of world-leading professionals led by Professor David Lacey, and will begin in Semester 1 2019.

In January, USC was named one of the top universities in Australia for providing skills that employers need. Of 41 institutions, USC ranked third for “overall satisfaction” and scored an 88.8 percent approval rating, which was above the national average.

Then in May, students rated USC the best public university in Queensland for the overall quality of student experience. Their views were recorded through the annual Student Experience Survey conducted by the Quality Indicators for Teaching and Learning (QILT).

USC once again placed in the 101-150 category of the top 200 universities under 50 years old in the Times Higher Education Young University Rankings. It is striving to be among the world’s top 100 young universities by 2020.

USC’s focus on becoming a centre for high-performance sport over recent years certainly paid dividends during the 2018 Commonwealth Games on the Gold Coast in April.

And the fledgling Australian Cycling Academy, after achieving many successes in its first year at USC (including gold in the team pursuit at the Commonwealth Games), is set to expand in 2019 as the rebranded Pro Racing Sunshine Coast.

In September, USC announced that it was now the official university partner of National Basketball League club Brisbane Bullets. This means Bullets players and coaches now have access to USC’s world-class sporting facilities and the expertise of the University’s highly regarded sport scientists.

USC this year appointed Professor Tim Wess as its new Deputy Vice-Chancellor (Academic) following the retirement of Professor Birgit Lohmann. Professor Wess, who was previously an Executive Dean at Charles Sturt University in NSW, now has broad responsibility for the academic activities of USC.

USC presented four Honorary Doctorates in 2018. In February, a special ceremony was held at the State Library of Queensland in Brisbane to honour Dr Cherell Hirst for her work in progressing techniques for the early detection and diagnosis of breast cancer.

At USC’s April graduation ceremonies, USC made former USC Chancellor John Dobson an Honorary Doctor for his dedication and service to USC and the wider community. Sadly John, who was Chancellor from 2007-2017, passed away recently (19 December).

Also in April, philanthropists Roy and Nola Thompson were awarded Honorary Doctorates in recognition of their ongoing support of the University. Donations from the Thompsons have provided countless scholarships for USC students and led to the establishment of the Sunshine Coast Mind and Neuroscience Thompson Institute, which provides integrated mental health and neurological research, teaching and clinical services. 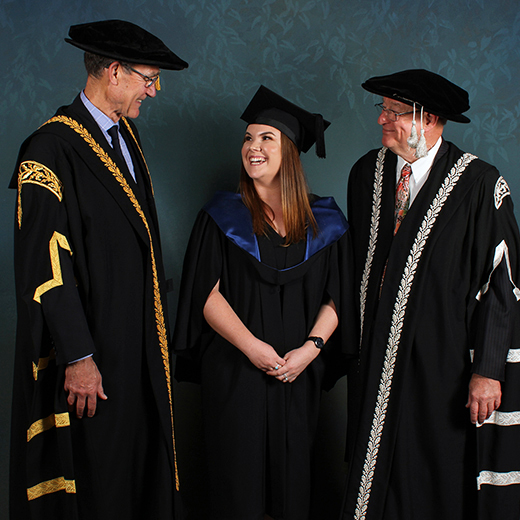