A USC academic who specialises in using drones to map physical geography over land and sea is excited by his research observations after returning from a flagship 21-day expedition, ‘GBR Legacy Search for the Super Corals’.

Dr Leon, who is now at Port Douglas, will be among team members outlining their findings at a public symposium tomorrow, Friday 8 December, from 7pm to 9pm at Hemmingway’s Brewery at the Reef Marina in Port Douglas.

The expedition, sponsored by crowd-funding, small business, the Australian band Midnight Oil and the Northern Escape Collection, focused on identifying species of coral that were least prone to bleaching. On board was a marine biologist known as the ‘Godfather of Coral’, Dr Charlie Veron.

“The research was an eye opener as we faced large extents of bleached coral but also many pockets of very healthy coral and everything from whales and dolphins to turtles and crocodiles,” said Dr Leon, whose fieldwork included flying a drone in the air and underwater mapping while snorkelling.

“We discovered a new site that had the most diversity of Acropora corals ever seen, including a new species of branching coral.

“There was evidence of baby corals growing from the latest bleaching event, which really gave people hope that the Reef is still alive,” he said.

Dr Leon will return to USC at Sippy Downs next week to start analysing 39,000 drone images and 117,000 underwater photos. 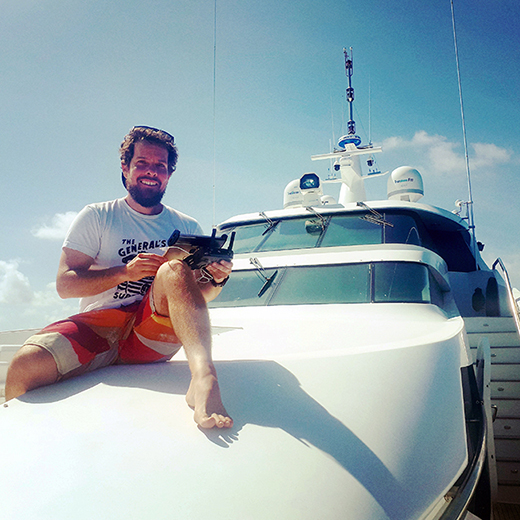 Action is needed to protect and restore disappearing local seagrass meadows, according to a USC scientist involved in an international study that has highlighted the important role seagrass plays in absorbing carbon dioxide from the atmosphere.