A USC medallist plans to play a role in securing Australia’s energy future, after gaining a highly prized graduate position with the organisation responsible for the nation’s largest gas and electricity markets.

Siobhán Attwood, 22, is one of eight graduates selected by the Australian Energy Markets Operator (AEMO), from a pool of more than 960 national and international applicants.

The Montville resident was awarded a University Medal for her grade point average of 6.85 out of a perfect 7 when she graduated with a Bachelor of Business (International Business) from USC recently.

“Since high school, I have wanted to work in the energy industry, particularly in climate change and policy,” said Siobhán, who will begin AEMO’s three-year graduate development program in February.

“While doing research for an assignment on potential renewable energy sources as part of my USC degree, I was inspired to become a part of the organisations that implement measures to secure our energy future while reducing our environmental impact.”

“The three-year graduate program involves rotations across the difference functions of the AEMO, and will give me experience in dealing with complex challenges facing Australia’s energy industry,” Siobhán said.

“My ultimate goal is to work within the three main branches of energy regulation and operations in Australia and to be involved in setting policy that could perhaps be used as a guideline for policy makers around the world.”

She said completing a semester overseas at the Novancia Business School in Paris was a highlight of the degree. “It gave me the chance to get outside my comfort zone, build a network of international business graduates, and experience another culture.”

Her advice for other students on achieving academic success was to stay organised and prioritise tasks based on deadline and size.

“It is important to remember that the more effort you put in, the more you’ll get out of it. You will never find yourself short on time to produce good work when you keep on top of things.”

Siobhán, who grew up on the Sunshine Coast until her family moved to New Zealand when she was aged 10, completed senior at Auckland’s Selwyn College and a year of university in Auckland, before enrolling at USC.

She said she found USC’s smaller campus offered distinct advantages to the larger university environment she had experienced in New Zealand.

“USC’s tutors and lectures were very supportive and encouraging and the smaller lectures and tutorial groups gave me confidence to participate fully in class discussions.”

Information on studying at USC 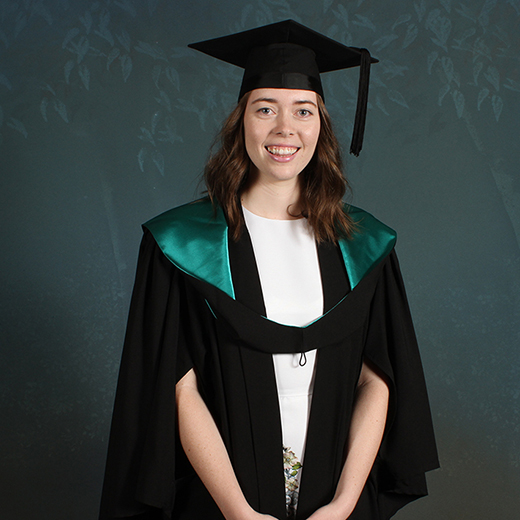