An Indian nurse who travelled halfway around the world to upgrade her qualifications at USC Fraser Coast will become the first international student to graduate from the campus.

Nilamben Patel said the life-changing move from her small home town in the Indian state of Gujarat two years ago had proved to be the best decision she could have made.

The 25-year-old completed USC’s Bachelor of Nursing Science last month and has been offered a position as a graduate nurse with Queensland Health.

“My experience studying at USC’s campus in Hervey Bay while living in the Maryborough has been excellent,” said Ms Patel, who recently attended a USC Ceremony of Completion for international graduands.

Ms Patel was working as an intensive care nurse in Gujarat state before a desire to advance her career motivated her to pursue higher academic qualifications overseas.

USC’s international reputation for high-quality nursing education and Hervey Bay’s beaches prompted her to select USC Fraser Coast from other campuses around the world.

“My goal is to eventually complete a Master of Intensive Care Nursing, and my USC degree and graduate nursing position are important steps along that path,” she said.

While arriving in a new country and adjusting to a new culture was daunting at first, Ms Patel said she quickly made friends with other students on campus, including international students from Nepal, South Korea and South Africa.

“The academic staff were very helpful and the face-to-face interaction in lectures and tutorials was of great benefit to my studies, which helped me settle into campus life and the wider community,” she said.

“The campus location is wonderful and it has every facility you could require, particularly the nursing simulation labs which put theory and knowledge into practice.”

As part of her studies, Ms Patel completed four clinical placements and an internship with the Wide Bay Hospital and Health Service, helping her to secure a graduate nurse position, which she will start in February.

“Through USC, my work placements and a part-time job at a local nail salon, I have met many people, gained wonderful experiences and improved my English-speaking skills.”

Fraser Coast-based USC Lecturer in Nursing April Martin said Ms Patel was a high-achieving student and would be a great asset to her future employer and the Fraser Coast community. 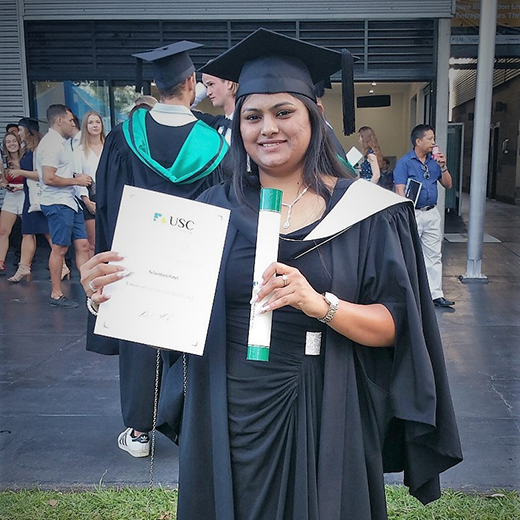